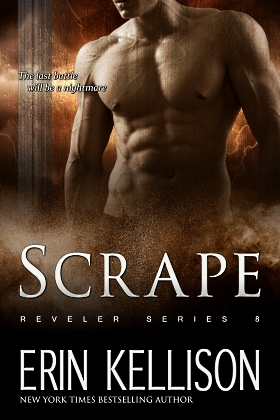 
The last battle will be a nightmare…

The Sandman has broken through to the waking world, bringing with Him a monster of a storm. Mirren Lambert and Vince Blackman set out to force him back into his own realm, while Malcolm Rook and Jordan Lane are cornered by an old enemy intent on revenge. They learn that there are no rules when fighting for the ones you love.

In the midst of the chaos, Harlen Fawkes is charged with finding a way to make dreaming safe again. As nightmares lurk in the fringes, waiting to attack, he is driven to a bold decision that will change the world Darkside forever. All the while, his heart is with Sera—will the love of his life ever wake again?

Steve Coll must come to grips with his altered nature. His passion for Maisie Lane transcends the darkness, and he becomes both a fearsome nightmare and the hero humanity so desperately needs. Armed with hope and love, he strikes out to defeat a powerful god. But will it be enough? Or has dreaming just become too dangerous?

Scrape is the eighth and final installment in the Reveler serial, a hot paranormal romance set in a world where shared dreaming is a new pop culture phenomenon that allows people to indulge their wildest fantasies. But there are also unknown dangers Darkside; nightmares are slowly infiltrating not only dreams, but the waking world as well. And behind them all is a shadowy entity called the Sandman.

Yep, this is the last book in the series and although every book here is short, none lack the punch of a novel with twice as many pages. I couldn't wait to find out what happened to our group and I knew it wouldn't be all sunshine and roses. I was correct in that asumption.

Without spoiling anything, I found myself wondering how everything will play out. As one after another loose ends were tied up, I didn't worry that the ending would answer all my questions. It did, but I did find that the ending with The Sandman a bit too easy once a certain character got involved, but I also liked the revelation that came with it in the final showdown. I guess revelers is a good series name. :)

I give this book 4 stars. It is a action packed book with a touch of romance thrown in for each paring. I especially liked Maisie and Steve's romance... but I will say no more. I highly recommend this whole series (which should be read in order) for those that enjoy UF and PNR.
Posted by Melissa (Books and Things) at 12:00 AM