The Japanese Lover by Isabel Allende 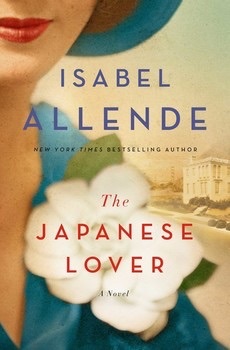 
In 1939, as Poland falls under the shadow of the Nazis, young Alma Belasco's parents send her away to live in safety with an aunt and uncle in their opulent mansion in San Francisco. There, as the rest of the world goes to war, she encounters Ichimei Fukuda, the quiet and gentle son of the family's Japanese gardener. Unnoticed by those around them, a tender love affair begins to blossom. Following the Japanese attack on Pearl Harbor, the two are cruelly pulled apart as Ichimei and his family, like thousands of other Japanese Americans are declared enemies and forcibly relocated to internment camps run by the United States government. Throughout their lifetimes, Alma and Ichimei reunite again and again, but theirs is a love that they are forever forced to hide from the world.

Decades later, Alma is nearing the end of her long and eventful life. Irina Bazili, a care worker struggling to come to terms with her own troubled past, meets the elderly woman and her grandson, Seth, at San Francisco's charmingly eccentric Lark House nursing home. As Irina and Seth forge a friendship, they become intrigued by a series of mysterious gifts and letters sent to Alma, eventually learning about Ichimei and this extraordinary secret passion that has endured for nearly seventy years.

Sweeping through time and spanning generations and continents, The Japanese Lover explores questions of identity, abandonment, redemption, and the unknowable impact of fate on our lives. Written with the same attention to historical detail and keen understanding of her characters that Isabel Allende has been known for since her landmark first novel The House of the Spirits, The Japanese Lover is a profoundly moving tribute to the constancy of the human heart in a world of unceasing change.

This is a book that really speaks to the times we are having right now. I don't know if Isabel Allende foresaw what would happen or if it was just the subject matter that spoke to her, but I feel that this hits on so many levels in the here and now and what is happening in the world.

She tackles the interment of both the Jewish people and Japanese Americans. Both shameful parts of both world and American history. She hit so many levels that at times I became angry since I see the world on the precipice of making the same mistakes. Things we should have learned. The author reiterates the attitudes of fear and detachment that caused people to turn their backs on those being tortured and terrorized and then turn on it's own citizens. Things that we need to see again through the eyes of history so we can become better world citizens and compassionate human beings.

The book just doesn't bring these things back into the light from the dark, but it also tells a story of true love and what we do to get in our own way. Interracial relationships are obviously a big part of this as you can tell from the title, but also other kinds of relationships just now seeing the light. The author also tackles what it meant to be gay in the 80s. She also brings in sex trafficking if that isn't enough issues for you to deal with in this short novel. However, thoughout the whole story you never feel overwhelmed by the subject matter because all the characters are so well rounded. I do seem to be more attached to Alma (who represents the past) than Irina (the present) but both brought me through the story in a way that kept my interest and actually find hope for the future. Ichimei and Seth also brought a lot to the story by mostly being present and bringing a different perspective to the table. The characters really made this book.

I give this boo 4 1/2 stars. I find this an interesting perspective not just of the past but also for the times we currently live.
Posted by Melissa (Books and Things) at 12:00 AM

Email ThisBlogThis!Share to TwitterShare to FacebookShare to Pinterest
Tag! You're it!: adult, contemporary, historical