Of Ice and Snow by Amber Argyle 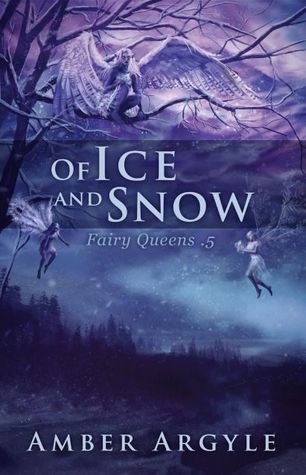 The middle child of the clanchief, Otec is the overlooked son in an overflowing house. He dreams of escape and adventure, so when a mysterious stranger offers both, he doesn’t need persuading. But when his faraway village comes under attack, Otec will do anything to save the people he loves. Cut off from his nation, he must trust a foreign woman with a dubious past as they race to save his clan. But nothing is what it seems, and Otec may have to trust his enemy if he is to become the leader he was never meant to be.

Destiny is not always kind.

I've been enjoying the Fairy Queen series. This one is about Ilyenna's parents the main character of the first book. Since this is a prequel, you don't even need to know that fact if you haven't read the other books. She doesn't make an appearance in this book, but it is nice to keep in mind for those that have read the series.

I really liked Otec and Matka the main characters. There is a lot of growth for both characters in such a short book. The book is also packed with action and war. The fae in this book make an important appearance but are not the main focus of this book. I think this book establishes how this clan cultivated loyalty and sets the background for the Snow Queen. It isn't necessary to the overall series, but to a fan it is a great addition. It reads as the others do, like a good engaging fantasy.

I give this book 4 stars. I recommend it to those that are already enjoying the series as well as those that like YA Fantasy.
Posted by Melissa (Books and Things) at 12:00 AM

Email ThisBlogThis!Share to TwitterShare to FacebookShare to Pinterest
Tag! You're it!: Faerie, fantasy, magic, YA