Against a Brightening Sky by Jaime Lee Moyer 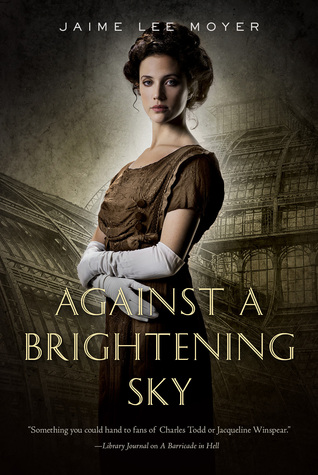 
A ghost princess and a woman with nothing but a name to her fortune might change the course of history.

By 1919 the Great War has ended, peace talks are under way in Paris, and the world has been forever changed. Delia Martin, apprentice practitioner of magical arts, and her husband, Police Captain Gabriel Ryan, face the greatest challenge of their lives when fragments from the war descend on San Francisco.

As Delia prepares to meet friends at a St. Patrick's Day parade, the strange ghost of a European princess appears in her mirror. Her pleasant outing becomes a nightmare as the ghost reappears moments after a riot starts, warning her as a rooftop gunman begins shooting into the crowd. Delia rushes to get her friends to safety, and Gabe struggles to stop the killing—and to save himself.

Delia and Gabe realize all the chaos and bloodshed had one purpose—to flush Alina from hiding, a young woman with no memory of anything but her name.

As Delia works to discover how the princess ghost's secrets connect to this mysterious young woman, and Gabe tracks a ruthless killer around his city, they find all the answers hinge on two questions: Who is Alina...and why can't she remember?

Against a Brightening Sky is the thrilling conclusion to Moyer's glittering historical fantasy series.


My thoughts:
This is a series that should be read in order for the characterization. You can skip the second book, but at least read the first book before diving into this one. I think you would be frustrated with not knowing as much about the characters as someone who has read in order.

This is said to be the last book, but when everything is over, it doesn't quite feel complete and that more could be explored in this world. There is so much life left to be explored for Delia and Gabe. I sincerely hope that this is not the last for this series. We also get a bit more of Dora, her best friend because the mystery also involves her past. It also involves the mystery of the Royal family during the Bolshevik Revolution in Russia. It was an interesting inclusion to the mystery and it fit well with the paranormal abilities of Delia.

In the end we do get a full conclusion to a few of the introduced secondary characters stories. While that felt solid it also felt a bit too quickly wrapped up. In addition, I would have liked to know much more about the necromancer who was after the tsar and his whole family. Even though I felt these things were weaknesses, it also didn't take away from the larger mystery at hand for our characters.

I give this book 4 stars. While I enjoyed the mystery and our main characters we have followed from book one I also enjoyed the new introduction to some secondary characters. We don't get a definitive ending but that may be a good thing by holding the door open for future books. I recommend this series to those that enjoy historical, paranormal mysteries.
Posted by Melissa (Books and Things) at 12:00 AM

Email ThisBlogThis!Share to TwitterShare to FacebookShare to Pinterest
Tag! You're it!: adult, ghost, historical