Blog Tour with Giveaway: The Frenchman by Lesley Young 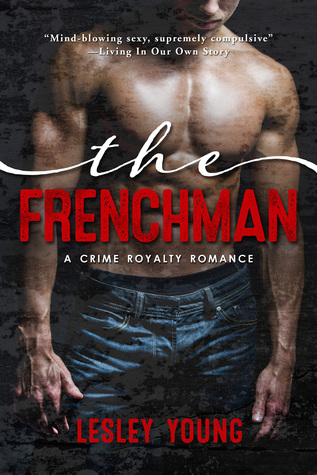 
Fleur Smithers rarely veers off the straight and (excruciatingly) narrow. So moving to the seaport town of Toulon to live with her newfound biological mother—an inspector with the French National Police—for one year is a pretty major detour.

Son of France’s crime royalty family and international rugby star, Louis Messette, is devoted to his sport, famille and nothing else. But the saucy American he meets one night changes everything. She sparks a desire in him like no other. Possession takes root. She will do as he commands.

Bit by bit Fleur slips into the Frenchman’s realm of wanton pleasure agreeing to his one condition: that she keep their affair secret. She serves up her heart without reservation in the hub of the glittering Côte d’Azur, and the along the soulful Seine in Paris, unaware of the danger she is in. For her new lover’s “family business” will pit her against her mother, the police woman sworn to bring down the Messettes. And by then, far more than Fleur’s heart will be on the line.

My thoughts:
I knew I was in for a bad boy story considering the series title. So, it did not surprise me that several times I wanted to throttle the man, Louis. Yes, this set up the tension well especially when Fleur, our innocent young lady meets Louis.

I have to say that several times throughout the book I was yelling at Fleur to "wake up" and see all the red flags waving in her face. All those things that told me this would be an abusive relationship. It bothered me that she ignored them all and continued to pursue this bad man. I mean he actually TOLD her he was bad but she still made excuses for his behavior. I honestly would have put the book down except for one thing... she acknowledged the red flags. Granted she pushed them aside, made excuses for them, but she kept seeing them. That made me think growth and so I continued on with the story.

Even though I convinced myself to continue... I admit I did throw the book down more than once. However my curiosity got the better of me and I continued on and was rewarded in the end. She finally stood up for herself and demanded her right to be given love not just have love taken from her. I cheered! There is a HEA and honestly I could have done without the romantic HEA, but it was acceptable to me and it did make me smile. :)

I give the book 3 stars. I actually had fun being so frustrated with the book. Of course if I was left upset I wouldn't have liked it, but I was rewarded in the end by Fleur.

Not too long after that, she started dreaming up quirky heroines who lose their hearts to extremely powerful, flawed heroes, only to find out what love really is while on a dangerous adventure abroad. She called it the Crime Royalty Romance series, and landed herself a pretty big agent at Spencerhill Associates. Never one to take the obvious path, Lesley ultimately decided to self-publish. She’s never sure who or what will pop up in her imagination next. The Irishman? The Spaniard? The Hawaiian? Anything’s possible, and she loves suggestions (or recommendations of really hot, er, talented, actors to work as a muses).

Stay in touch with her and feel free to forward on decent options at Facebook.com/LesleyYoungBooks and @LesleyYoungBks (note: Charlie Hunnam’s already taken the lead role of The American—#3 Crime Royalty Romance...coming soon!).


Giveaway!
Lesley has provided a fantastic giveaway, including a $25 Amazon gift card and 20 ebook copies of The Frenchman! To enter, please fill out the Rafflecopter form.

Email ThisBlogThis!Share to TwitterShare to FacebookShare to Pinterest
Tag! You're it!: adult, new adult, Romance