Review and Giveaway: A Really Awesome Mess by Trish Cook and Brendan Halpin 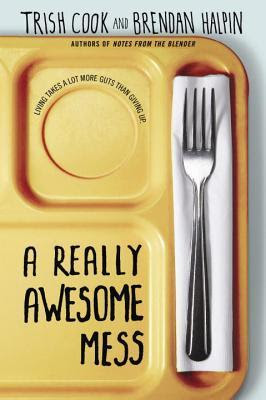 Justin was just having fun, but when his dad walked in on him with a girl in a very compromising position, Justin's summer took a quick turn for the worse. His parents' divorce put Justin on rocky mental ground, and after a handful of Tylenol lands him in the hospital, he has really hit rock bottom.

Emmy never felt like part of her family. She was adopted from China. Her parents and sister tower over her and look like they came out of a Ralph Lauren catalog-- and Emmy definitely doesn't. After a scandalous photo of Emmy leads to vicious rumors around school, she threatens the boy who started it all on Facebook.

Justin and Emmy arrive at Heartland Academy, a reform school that will force them to deal with their issues, damaged souls with little patience for authority. But along the way they will find a ragtag group of teens who are just as broken, stubborn, and full of sarcasm as themselves. In the end, they might even call each other friends.A funny, sad, and remarkable story, A Really Awesome Mess is a journey of friendship and self-discovery that teen readers will surely sign up for.

My thoughts:
I'm not someone who loves issue books. I do like that they are out there and feel that their presence is important especially to teens. Although I knew this would have some issues I didn't think I would mind it as much. I was right.

I have to admit that at the beginning I did not like the book. Emmy starts off as mean and angry and used a lot of slang in front of adults. Most teens use one type of language to their peers and another to adults. Not only that, but the facility she was put in seemed a bit hokey and a little too good to be true. When I was introduced to Justin, it kept up that same image to me. I just thought I wouldn't like the book.

When we start to get to know more of the secondary characters the other two main characters, Emmy and Justin, started opening up to me and I really started to like them both. As time went on I still didn't love the facility but it didn't bother me. In the end, it was not the counselors who challenged the kids, but each other. Their small group challenged each other and called each other on their B.S.

In the end I give this book 4 stars. I didn't love the beginning, but I did enjoy the rest of the story. I liked how these kids came together and learned how to help themselves. I also liked the theme that it is brave to keep going in life rather than giving up no matter what is thrown at you.

Media Masters Publicity and EgmontUSA are sponsoring the giveaway the book! Just fill out the rafflecopter form below to enter. The giveaway is US only. I'm keeping this giveaway open until the release date on the 23rd.
a Rafflecopter giveaway
Posted by Melissa (Books and Things) at 12:00 AM

Email ThisBlogThis!Share to TwitterShare to FacebookShare to Pinterest
Tag! You're it!: contemporary, giveaway, YA