Other Oceans (Hook and Jill Saga #2) by Andrea Jones 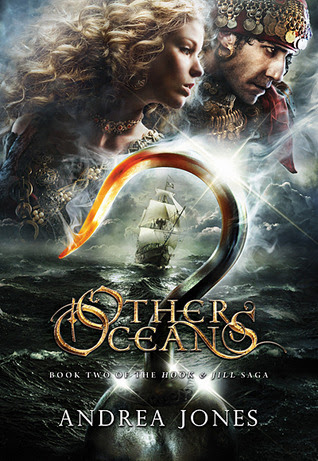 
"Identify the weapon, and use it first." Such is the code of Captain James Hook, in this lyrical sequel to Hook & Jill. And this time, the turmoil begins not with 'The Boy' — but with a girl.

Ten days out of Neverbay, Hook and Jill capture a ship's surgeon, pressing him to join the Roger. But Doctor Hanover is a gentleman, with a daughter to defend. When Red-Handed Jill shows him favor, his heart is taken prisoner, too. Hanover contrives to deliver Jill from the pirate king, and redeem her to society… as his wife.

But Captain Hook is impossible to escape. Other rivals contend for Jill's red hand, and Hook fights for supremacy with his skill and brilliance. When the doctor's daughter draws Hook's eye, she emulates Jill, using feminine weapons to charm him.

With no word of farewell, Hook vanishes, and Jill is a queen without a king. To hold Hook's power, she must come to terms with each of the dangerous men in her domain. When a challenger seizes command of the Roger — and over Jill — Hook and Jill's dominion will be overthrown unless, as Hook has taught Jill to do, she can identify the weapon…and wield it wickedly.

Other Oceans is an unabashed study in loyalty, vibrant with the dynamics of power. From the pen of a masterful crafter, Book Two of the Hook & Jill Saga delivers all the exhilaration that a clash of wills, hearts, and fortune can arouse.

I read and reviewed Hook and Jill, the first book in the saga and absolutely loved it. I've recommended the book to people several times as well. When I saw that this book was out, I read the blurb and became quite worried. What? Is she going to mess with my couple? No! Does Hook go off with someone? I just didn't know if I could take the separation of the two. Silly? Perhaps, but those of us who love characters just don't want them to be separated in a horrible way. Plus, the man on the cover isn't Hook! So, I admit I didn't ask for the book for review, but every time I saw the cover, I considered it. I just didn't think I would like it... until... the author contacted me about reviewing the book. I didn't hesitate and said yes... despite whatever the outcome would be... *sigh*

So, did I like it? Well, let me put it to you this way... about 200 pages in I knew that 600+ pages wouldn't be enough for me. I knew I'd want more. I was right. I was enthralled with this book. I can't say I didn't want to put it down. In fact, I did that... a lot. Why? Well, you know when you get upset with a character and just slam the book to take a second? Of course then I couldn't stop thinking about it and picked it up a couple of hours later (fine, in all honesty it was probably more like 5 minutes later). Also, with a good book, I want to make it last. I try to keep myself from reading too much all at once, but although it helped, the book still ended way too quickly for me. No cliffies... don't want to give that impression... I just wanted more of the saga after it was done.

Ugh... what else can I say? This is hard. I want to discuss characters so badly, but I'm afraid I'd spoil things and this book is too much fun to do that. I will say that even when you are sure of someone's loyalty, you end up questioning it. Usually you know, but it wasn't always so clear cut for me as the reader. I loved that. I did question some of Jill's attraction to some of the men. But she is young yet and perhaps that is why she is attracted to some things she should question more fully with herself. Still, Jill did not disappoint me in the end and I loved how she out maneuvered most of the men in her company. I could go on and even want to point out some things that I have thought about from a psychological point of view, but then again, I think it could spoil things if not for this book, but for those that have not read the first book.

I give this book a 5. This is not a children's story, but an adult retelling. This series is to be read in order. I wouldn't have you miss the first one anyway. That was fun and this one was an adventure from cover to cover. Btw, is Other Islands out yet? ;) (Psst... no date has been set, but I want already!)
Posted by Melissa (Books and Things) at 12:00 AM

Email ThisBlogThis!Share to TwitterShare to FacebookShare to Pinterest
Tag! You're it!: adventure, fantasy, pirates, retelling, Romance