Four of today's most exciting paranormal authors take readers into the thrilling realm of vampires, immortals, and other supernatural beings with a thirst for illicit desire...

Out Of Control by Alexandra IvyPh.D

Student Angela Locke has a crush on her sexy professor, Dr. Nikolo Bartrev. When she learns he's actually a Sentinel with extraordinary powers, she joins forces with him to catch a psychopath. But soon, their hottest pursuit is of each other...

Ties That Bind by Nina Bangs

Cassie Tyler agrees to sub for her friend at the funeral home where she works. But she gets more than she bargained for when a group of men attack her and a vampire comes to her rescue. . .

Immortal Richart d'Alençon can't forget the woman who rewarded him with a sensuous kiss after he saved her from a trio of vampires. While Richart knows that loving a human can only bring trouble, the taste of forbidden lust is too great to resist...

When vampire fashionista Nina LaShay's design contest rival is found dead, she's the prime suspect. Sexy photographer Pike is number two. He's the kind of man who makes Nina salivate. But will she have to reveal herself to have him--and to save them both? Or does Pike have a secret of his own?​

I know that some people enjoy anthologies and some don't. I admit, I fall into the former category. I like introductions to new worlds that I want to visit because it is part of a series I want to read or just visiting worlds just invented for the short story. I also think that short stories are very hard to write. You have to develop a connection and a world in a very short time. So when it works, I really enjoy it.

In this anthology 2 of the 4 stories was an introduction to a new series and another one was part of an already established series. These were my favorites. Out of Control brings us an interesting world where people develop paranormal abilities and are separated from the "norms". It's a great start to the series and has me interested in further stories. In some way the romance felt a bit forced due to the length, but yet still kept my interest. I'm very curious as to how this world evolves within the series. I'm looking forward to reading it.

In Ties That Bind, I think this one isn't an introduction to a new series. I thought it really started off with a bang and was very gritty and gothic. Much darker than most PNR you read. However, it sort of got a bit funny to me when what kills others is the beauty of the vampire. Some may eye roll at this and some may actually love the creativity within. I did both, but was entertained no matter what my eyes were doing.

In Still Darkness is a part of an established series (Immortal Guardians) which I have read and reviewed. I love this world and the stories and this one was just so much fun going back to that world and learning about another character. You don't have to have read the others to get it, but it makes it just that much more fun if you had. If you love this series (like me) then you will really love this short.

High Stakes is a fun PNR with a lot of tongue in cheek. I suspect I will like this series much better when there is more time to really explore the mysteries surrounding the main character Nina. I also think I will have more fun with a longer novel as it should really bring out Nina's snark. I can see the beginnings of excellent snark... can't wait to see how it is even better pulled off.

All in all I give this anthology 4 stars. Like other anthologies you will enjoy some more than others, but in all, it was an entertaining book. Great for introductions to other PNR worlds which is what I think this book was all about. It pulled it off nicely. :)

I received this eARC from the publisher and NetGalley and no compensation for my review was given.

Bloggy note:
Come back tomorrow for a blog post and a great giveaway from Dianne Duvall! 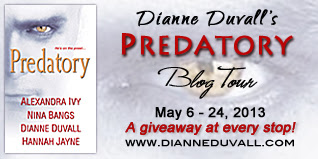 Email ThisBlogThis!Share to TwitterShare to FacebookShare to Pinterest
Tag! You're it!: anthology, Romance, Vampire