Bronze Gods (Apparatus Infernum #1) by A. A. Aguirre 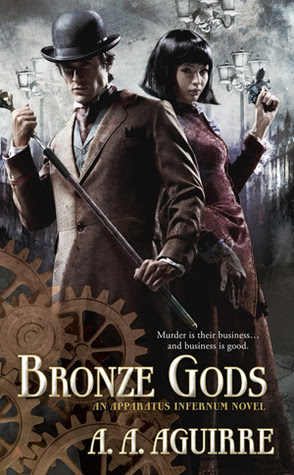 This book is steampunk but does not go overboard with the mechanicals. I know that some people either look for those things or are wary. In this world it has more the "flavor" of steampunk and fantasy but still comes off more a UF mystery. Let me just say, it is a very interesting world indeed!

In this book Mikani and Ritsuko are our two main inspectors in which we follow this murder mystery. They are tasked with finding out who and why rather quickly even when there seems to be no road in which to follow. Both are good at relying on each other and together they are a formidable force. In other words, very complimentary. So, when there was a hint of romance between the two, I admit I was not in favor of the development. In fact, I was wishing the opposite. However, since this was anything but insta-love, things slowly developed between the two of them. I then found myself rooting for the relationship.

Mystery lovers will enjoy this tale I think the most. The way things were sussed out and the way they applied their minds together was quite interesting. I really enjoyed the ride trying to help them figure out who was killing and why. In the end, I was convinced I was right, but was lead expertly to the wrong conclusion. In fact one I had suspected and dismissed played a bigger role than I thought and it all ended up making sense.

I think my only complaint was the POV shifts. It was a bit abrupt between Mikani and Ritsuko at times, but not so much I couldn't easily figure out who was who. What I did enjoy the most were the characters. All well drawn out including the secondary characters. In fact, I'm quite curious about Theron. He has become a fascinating character to me.

I give this book 4 stars. I recommend it to those that like steampunk, fantasy, UF and especially mystery books. Yea, it's a fun ride for all. :D

I received this eARC from the author and no compensation for my review was given.


Bloggy note:
Come back Monday (6th) for a author blog post and giveaway!

Email ThisBlogThis!Share to TwitterShare to FacebookShare to Pinterest
Tag! You're it!: Faerie, mystery, Steampunk