Paws with a Cause: Pets and Tricks 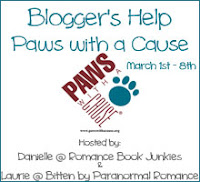 
First, one of the things I'm supposed to do this week is talk about my pets. I've had various types of pets throughout my life. Mostly dogs, but I've had cats, fish, hamsters and a guinea pig. Yes, you can say I wuv animals. :) With my dogs I've had both mutts and purebred. Most are rescues, including the purebreds. I've had a pit bull mix when I was a kid (his momma was a pit and his dad was a high fence jumping salesman) and EVERYONE who met him wanted him. He was a sweetie and a good example of the breed. He loved puppies and kitties especially. It makes me so sad when people allow prejudice to color what is in front of you. You miss out on so much. This prejudice has also lead to people having their dogs put down just because of their perception and not because of something they did. This has even affected people's service dogs. Those dogs in which they depend on for everyday living. Viewing people as well as other living creatures through a film of fear is dangerous. So, now you know why I am passionate about BSL. It's something that still affects me, by choice, since I have a doberman currently.

Oh and to why I currently have a doberman? I have met a few and they are also described as clowns. Heh... so true. My boy makes me laugh at least once a day. It was not protection as many assume. As for protection I did have a dog that was VERY protective of me. It was not my pit, nor my doberman (although I have no doubt they would return the protection favor), it was a sheltie! Dogs have a pretty good innate sense of danger... and you don't need a "tough" dog to be protected. In fact she protected me so much she even became my migraine alert dog. She could tell that I was going to have a migraine before it got bad.
Hm...
*looks at doberman*
*clears throat*
*gets innocent look in return*
Oh well...

I've also been involved in dog agility. Again, it was my shelties that got me into the sport. I wanted to do something fun with my dogs and there was a club just forming in my area. I had so much fun doing that sport. It is something I'd like to do again someday.

I hope you stick around for the full week. For the week I just thought I'd  have a small giveaway of a book I recently reviewed. Give an article from a trainer I've really come to admire. I also have a romance giveaway in the end. Yes, it has a dog in it. :) Hope you will stay with me for the week. So, non-doggy peeps... do bear with me. :)
So before you go... the tricks! *waggles eyebrows*


I thought it would be fun to show you 3 fun tricks I've taught my doberman. All of them very easy to teach. Oh yea... my malemute would like me to point out something of import:
Now drumroll...


Okay, dog peeps... what tricks have you got up your sleeves? What trick should I teach next?


Oh and I did find a good book on fun training (see I can still go with the book review flow):


101 Dog Tricks is the largest trick book on the market and the only one presenting full-color photos of each trick and its training steps. The step-by-step approach, difficulty rating, and prerequisites allow readers to start training immediately. Tips and trouble-shooting boxes cover common problems, while "build-on" ideas suggest more complicated tricks which build on each new skill. No special tools (such as clickers) or knowledge of specific training methods are required. Trick training is a great way to bond with your dog and help him integrate into your family. It keeps him mentally and physically challenged and helps to establish paths of communication between you. Many tricks build skills needed for common dog sports, dog dancing, and dog therapy work. It's every dog lover's privilege that Kyra and Chalcy took time from their performing schedule to share their secrets in 101 Dog Tricks.

Also don't forget to enter to win one of the 4 prizes in the big giveaway by donating to a great cause! Deets are HERE
Posted by Melissa (Books and Things) at 12:00 AM

Email ThisBlogThis!Share to TwitterShare to FacebookShare to Pinterest
Tag! You're it!: dog, paws with a cause