A girl with an unknown destiny.

A boy from a hidden world.When Celeste starts at a new school in a small, Kansas town, she hears whispering voices, has vivid nightmares, and swarms of blackbirds follow her every move. She is oddly drawn to aloof Rylan, the other new student who has his own secrets.The exact moment she turns seventeen, she wakes to a bedroom full of strange creatures, purple light emanating from her hands, and Rylan breaking in through her bedroom window.

Intriguing and deeply romantic, RUA is page-turning YA novel with a supernatural twist.

She woke a short time later, heart pounding and energy thrumming through her body. She lifted her hands, saw they were shaking then tried to bury them back in the blankets. Her stomach lurched.
She pulled herself to a seated position, looking at her bedside clock. It read 10:03. She felt the truth in her bones. She was now seventeen, and whatever would happen was happening now.
A vibrating sensation started in her toes, then moved up her body. In a matter of frightening seconds, her whole body tingled.
“What’s happening?” Fear settled cold and hard in her belly. She tried to stand, but was overwhelmed by a torrent of sound.
“Oscail an doras! Oscail an doras!” Voices surrounded her, filling her head with strange words. Her head ached like it did when she saw Rylan, a drummer inside her head beating its way out. The birds outside grew restless: scratching, clawing, and squawking in the night air. Shadows filled her room, moving and twisting.
She jumped out of bed and backed against the window. The shadows filled in, details forming: clothes, skin, hair. They were people; wispy, dark, gossamer, but actually there in her room. They moved toward her, begging and pleading for something. She didn’t understand their words.
She put her hands in front of her. “Stop! Please!”
As she did, purple light shot out of her hands. The shadows recoiled. “Oh my God, oh my God, oh my God,” she cried. She pulled her hands back and turned them palms up. A purple flame pulsed in the palm of each hand, twisting and rolling like fire.
But she didn’t have time to process it. The people in her room were everywhere, some hanging off her ceiling in strange, unnatural ways. They filled the room, stacking on top of each other, occupying the whole space from the floor to the ceiling. Some had strange, ancient-looking clothes on, some had none at all. Some had normal human skin tones, and others did not.
A very short woman with gray skin and bright pink hair grabbed her leg. “Please, open it,” she said. The top of her head came only to Celeste’s mid-thigh.
Celeste screamed. She kicked the creature off her leg.
She heard pounding on the door. “Ce Ce! Open this door! Are you okay?” She barely heard her dad’s voice over the shrieking, warbling creatures.
“Dad! Help!” she screamed.
Two loud thumps on the door. “I can’t get in. It’s jammed! What’s happening?” he yelled through the door.
The creature grabbed her leg and pulled hard, sending Celeste flying to the floor. She landed on something squishy, and it screamed in protest. She screamed along with it.
Something yanked on her left arm and shoulder, pulling her to her feet. A cold hand covered her face.
“Celeste, look at me,” the voice said.
She focused on the source of the voice. Rylan. Half in, half out of her window. He dropped his hand from her mouth.
“What are you doing here?”
“No time. You need to come with me.” He extended his hand, green eyes blazing.
She hesitated, glancing at her door, where the pounding caused by her father’s attempts to enter grew louder and louder.
“He can’t help you. I can.”
She took his hand.
He clapped his other hand over hers, then lifted her up and out through her window. She landed hard on the grass, panting, surprised at his strength. The crows flew in big black circles above them.
“Now what?” she asked.
“Run.”

Miranda Kavi is a YA and Urban Fantasy author. She has worked as an attorney, an executive recruiter, and an assistant in a biological anthropology lab. She loves scary movies, museums, and is hopelessly addicted to chocolate. She lives in the Houston area with her husband and daughter.

There is a GIVEAWAY! 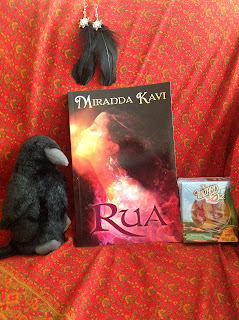 US Only
Paperback of RUA
Cute little stuffed blackbird (complete with an authentic crow call recorded when you squeeze it) and more swag!
How cute is that? The giveaway is run by the tour. To enter just fill out the rafflecopter form below:
a Rafflecopter giveaway
Posted by Melissa (Books and Things) at 12:00 AM

Email ThisBlogThis!Share to TwitterShare to FacebookShare to Pinterest
Tag! You're it!: blog tour, giveaway, YA