Fierce, seductive mermaid Syrenka falls in love with Ezra, a young naturalist. When she abandons her life underwater for a chance at happiness on land, she is unaware that this decision comes with horrific and deadly consequences.

Almost one hundred forty years later, seventeen-year-old Hester meets a mysterious stranger named Ezra and feels overwhelmingly, inexplicably drawn to him. For generations, love has resulted in death for the women in her family. Is it an undiagnosed genetic defect... or a curse? With Ezra’s help, Hester investigates her family’s strange, sad history. The answers she seeks are waiting in the graveyard, the crypt, and at the bottom of the ocean—but powerful forces will do anything to keep her from uncovering her connection to Syrenka and to the tragedy of so long ago.

I was pleasantly surprised by Monstrous Beauty. It was dark and it also harkens back to the mythology of mermaids while still inventing some of it's own. In this one there are alternating POV in terms of the past with Syrenka and the present with Hester. At first, this was a bit off-putting, but quickly resolves itself into sharing bits of the story as we need it.

The mystery that surrounds Hester is also not fully revealed at once, but slowly shown to us as we get to know both her and Syrenka of the past. I enjoyed this as it allowed the story to preserve some of the tension. Syrenka is also a character I really enjoyed. Even though I would have liked to know her much more intimately, I think the distance also made sense. She wasn't human and so had a different way of looking at things. It was her struggle to love and be loved that made her character stand out to me. Hester, I also enjoyed, but admit to liking a bit less when quick decisions make you question the quality of her character. However, these moments were few so it didn't end up bugging me that much.

I give this mer-tale (get it?) 4 stars. I really enjoyed a story that harkened back to the mythology of old. One where the main themes are of loneliness, love/death, sacrifice, and mystery.

I received this ARC from Farrar Straus Giroux and no compensation for my review was given.
Bloggy PS:
I would also like to say something about the cover. The cover I first saw was: 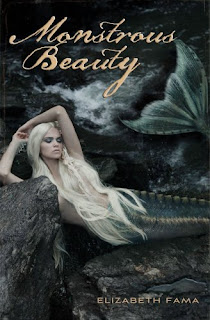 I loved it and it makes sense in the book. However they changed it and I don't know why! I think this one was perfect and the current one... quite frankly doesn't fit the story as well. *sigh*
This book is to be published tomorrow!
Posted by Melissa (Books and Things) at 12:00 AM

Email ThisBlogThis!Share to TwitterShare to FacebookShare to Pinterest
Tag! You're it!: mermaid, mythology