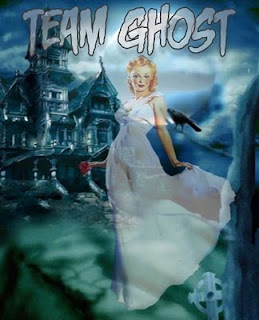 Girl of Nightmares by Kendare Blake
TBP in 2012

I know.. I know... 2012??!! But I had to add it as soon as I saw the cover. Plus I'll have the review of the first one up tomorrow. Curious about the first? Don't forget you can enter to win it as part of the grand prize HERE. Plus the more you trick or treat on the participating blogs the better chance you have to win. All info is HERE.

Between by Jessica Warman
Published

Description:
Elizabeth Valchar --- pretty, popular and rich --- wakes up the morning after her 18th birthday on the yacht where she’d been celebrating with her closest friends. A persistent thumping noise has roused her. When she goes to investigate, she finds her own drowned body is hitting the side of the boat. Liz is dead. She has no memory of what happened to her, and can only observe in horror the fallout of her death.

She’s also soon joined by Alex Berg, a quiet boy from her high school who was killed by a hit-and-run driver. The two keep each other company, floating in and out of memories and trying to piece together the details of what happened to each of them.

In her regular life, Liz was a runner. It wasn’t abnormal for her to run 8-10 miles per day. But as memories from closer to her death begin to surface, Liz finds that she’d been running much more than normal, and that she’d all but stopped eating. Liz’s mother, who died when Liz was nine, had battled with anorexia as well, and those around her worried that Liz was following in her mother’s footsteps. But something more sinister was consuming Liz from the inside out...

Indelible by Lani Woodland
Published
Description:
Sixteen-year-old Yara Silva has always known that ghosts walk alongside the living. Her grandma, like the other females in her family, is a Waker, someone who can see and communicate with ghosts. Yara grew up watching her grandmother taunted and scorned for this unusual ability and doesn t want that to be her future. She has been dreading the day when she too would see ghosts, and is relieved that the usually dominant Waker gene seems to have skipped her, letting her live a normal teenage life. However, all that changes for Yara on her first day at her elite boarding school when she discovers the gene was only lying dormant. She witnesses a dark mist attack Brent, a handsome fellow student, and rushes to his rescue. Her act of heroism draws the mist s attention, and the dark spirit begins stalking her. Yara finds herself entrenched in a sixty-year-old curse that haunts the school, threatening not only her life, but the lives of her closest friends as well. Yara soon realizes that the past she was trying to put behind her isn't going to go quietly.
Don't forget to enter for the contests!
So what is on your spirited wishlist this week?
Posted by Melissa (Books and Things) at 12:00 AM

Email ThisBlogThis!Share to TwitterShare to FacebookShare to Pinterest
Tag! You're it!: ghost, Wishlist