The Hum and the Shiver by Alex Bledsoe


No one knows where the Tufa came from, or how they ended up in the Smoky Mountains of East Tennessee, yet when the first Europeans arrived, they were already there. Dark-haired, enigmatic, and suspicious of outsiders, the Tufa live quiet lives in the hills and valleys of Cloud County. While their origins may be lost to history, there are clues in their music—hints of their true nature buried in the songs they have passed down for generations.

Private Bronwyn Hyatt returns from Iraq wounded in body and in spirit, only to face the very things that drove her away in the first place: her family, her obligations to the Tufa, and her dangerous ex-boyfriend. But more trouble lurks in the mountains and hollows of her childhood home. Cryptic omens warn of impending tragedy, and a restless “haint” lurks nearby, waiting to reveal Bronwyn’s darkest secrets. Worst of all, Bronwyn has lost touch with the music that was once a vital part of her identity.

With death stalking her family, Bronwyn will need to summon the strength to take her place among the true Tufa and once again fly on the night winds. . . .

This was a curious book for me. The book starts out shrouded in dark mystery. Bronwyn Hyatt who returns from Iraq a hero finds herself back at home where she ran. The town which is where you first see the dark mystery is a comfort to Bronwyn and a curse. She is happy to be back home to heal, but fears what will be asked of her. No, she fears what will be demanded of her. She's never been one to sit and let others decide her fate, so she now has to balance what is good for the community and what is good for herself.

At first you might think this is one of those stories where you meet the backwoods mountain people who shun all forms of technology. Thankfully this isn't one of them. The people are quite educated and worldly even if they prefer to keep to the community from which they were raised. However, the darkness we often associate with this type of closed community is there. We just don't know what will happen when the light of knowledge pierces the dark. Will we find good people or evil? Ah, no... I will not reveal that. *evil laugh* But I will say that it is the fact of their very nature that is put to the question.

These people have a secret sign language, a way private that they greet and bless each other. They are also deeply connected to music. Music that may bring either the hum or the shiver to your soul. Of course we also deal with haints (ghosts) who often either help by imparting knowledge or wisdom or even something more sinister. The Tufa people have a way of dealing with haints as well. It is all done cautiously and reverently.

I also enjoyed the secondary characters in this story. Even the preacher, Craig Chess plays a big part. I enjoyed the way he tried to pierce the silence of the community with patience and an open mind and heart. He did want to get them into church, but really he wanted to know more about the people. He doesn't mind being in a place where the majority would be called heathens in any other church. So, those that might worry, there is no preaching even from him. However, he does make an interesting contrast for the story.

I give this story 4 stars. It is a different type of paranormal story. It also makes you want to know what their voices and songs really sound like.
I received this ARC from the publisher, Tor, and no compensation for my review was given. 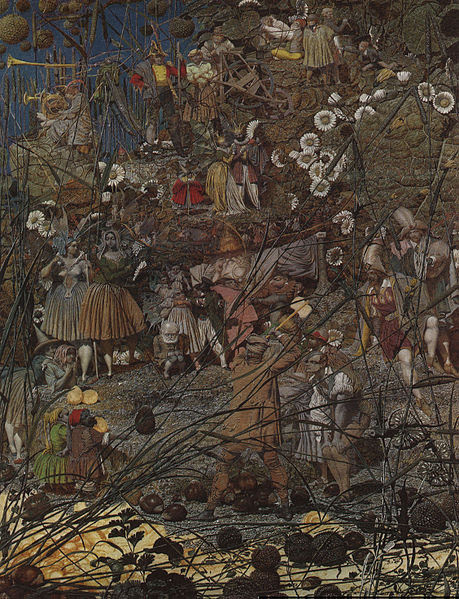 This painting done by Richard Dadd called the Fairy Feller also plays a huge role at the end of the book. I had to add it. :)
Posted by Melissa (Books and Things) at 12:00 AM

Email ThisBlogThis!Share to TwitterShare to FacebookShare to Pinterest
Tag! You're it!: Faerie, ghost