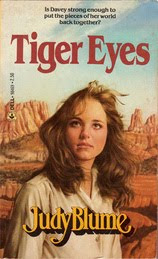 Davey has never felt so alone in her life. Her father is dead—shot in a holdup—and now her mother is moving the family to New Mexico to try to recover.
Climbing in the Los Alamos canyon, Davey meets the mysterious Wolf, who can read Davey’s “sad eyes.” Wolf is the only person who seems to understand the rage and fear Davey feels.
Slowly, with Wolf’s help, Davey realizes that she must get on with her life. But when will she be ready to leave the past behind and move toward the future? Will she ever stop hurting?

Who hasn't been affected by Judy Blume at one time in their life? Tiger Eyes is a book that I remember as a kid. I loved this book. It's about loss. Not just the loss of her father through death but with her sense of safety, sense of normal. She meets a mysterious stranger named, Wolf whom she falls for, but more importantly she is helped by this person. Wolf helps her realize that life is worth living and the future can hold more than just sorrow. He helps her to feel again and not just try to live in a world that is numb. 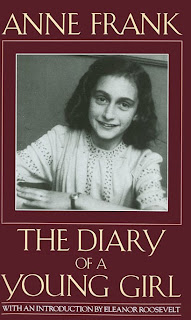 Of course this one is a bit of a no brainer, but again, an important book that has been banned for one stupid reason or another.

So, what banned books do you remember? Which one's stood out in your mind? Which one's shocked you when you found out they were banned?

Lists of Frequently Banned books.
Posted by Melissa (Books and Things) at 12:00 AM

Email ThisBlogThis!Share to TwitterShare to FacebookShare to Pinterest
Tag! You're it!: banned book