RITA Award-winning author Gwyn Cready continues the 'sexy fun' (BookPage) of her charming time-travel adventures with a high-spirited tale of a modern-day mapmaker and the eighteenth-century English navy captain she can't resist.

Ambitious and feisty Josephine 'Joss' O'Malley has spent years fighting to keep her mother's map-making company alive. Just when she finds herself considering taking a risky next step with bad-boy entrepreneur Rogan Reynolds - whose generosity has helped keep the business afloat - Joss meets dark and mysterious Hugh Hawksmoor. Hugh's deft touch and old-world seduction stir Joss's desires like a storm at sea, and she has no clue that he has sailed three hundred years into the future to avenge the death of his brother at the hands of her father. Or that she holds the key to a map that will help him undo the destructive changes her father wrought in the past. When Hugh lures Joss into a treacherous journey through time, there's not a twenty-first-century trick that can save her. But when she applies her own instincts to a course she thought was set, she discovers that the high seas hold some scandalous surprises.

Along with mapmaking, Joss's mother was also an apt storyteller. She wove the story that Joss decided that would guide her through life. "The Beautiful Mapmaker" was that story. And with it, we also follow Joss's story in this book. That part I thought was brilliant. It gave you a guide to what was going on within the story and more importantly how Joss judged things in her life as good or bad. I also enjoyed the eventual pairing of Hugh and Joss. They make a good couple even when I wanted to kick Hugh in the butt for insisting that Joss be honest and trustworthy, but did not think he needed to be just that in return. The parts of himself he kept secret I would have thought had made Joss more suspicious, but yet, she trusted him wholly. I had a bit of a problem with that.

I also had a problem with the "bad" guy. Without giving too much away, I will say that his motives were absent. I just wasn't convinced that the one they found themselves running from was that evil. I think more of the story needed to be placed on his motives for being obsessed with Joss as well as wanting things to stay the same at all costs. In fact the one I couldn't stand throughout the book was Fiona and was hopeful it was her who was truly evil. She wasn't. In fact you could have lifted this person from the story and it would have ran even smoother. I could have seen a twist coming with this character, but the story ended without my twist.

I really wanted to love this book. I loved the way Hugh came to terms with his brother's death and the way the story followed her mother's stories so well. However, I just couldn't get into the ending. Twists and turns that I thought might come never did. Yes, that would have made it predictable, but it was better than a let down and not being able to put evil with the bad guy. The HEA just wasn't as satisfying because of that.

I give this book 3 stars. Other than what I felt was it's failings, I did enjoy most of the story.

Win the Kate Spade Leopard bag from Gwyn Cready! For a promotion for her upcoming book, "Aching for Always". Just go HERE to get all the details. You can also go to www.cready.com to get to the contest page. Contest ends Oct. 4th. Good luck! 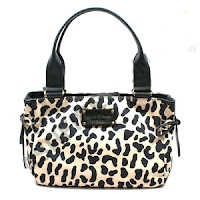