A meme "On My Wishlist" hosted by Book Chick City 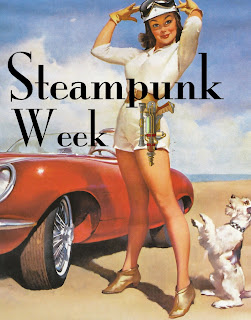 Well, start with 'steampunk'. 'Steampunk' is a look-- a sort of Victorian-era mad scientist-adventurer look- all clockwork gears and brassy bits, leathery straps, and even the occasional bit of lacey filigree. Now apply that look to polymer clay creativity and you have 'steampunkery'! a wonderful way to combine polymer clay sculpting tricks (like making a miniature leather strap complete with wire buckle and tiny little fake stiching) with embellishments of vintage pieces (like watch parts), found objects (like old pen nibs), and stuff you've got in your craft stash (like beads and paper scraps). Doesn't that sound like fun?!

There is a lot to enjoy in this book- a hinged heart pendant that opens to reveal it's inner workings, cute little steampunk critters (complete with goggles of course) and other fun stuff-- pendants, sculptures, wall pieces, even thing you can add to costumes, if you're into that sort of thing.

All the projects are presented step-by-step with lots of pictures and thorough explanations (with some silliness thrown in, just for fun). It doesn't matter what your skill level, the projects are challenging without being stressful, and structured without being confining. Plus there are lots of hints and creative nudgings to help keep your creative gears turning.

Steampunkery. You know you want it.

Cabinet of Curiosities
A collection of art and stories
Description:
All-new stories and art from the doctor's wondrous collection

After the death of Dr. Thackery T. Lambshead at his house in Wimpering-on-the-Brook, England, a remarkable discovery was unearthed: the remains of an astonishing cabinet of curiosities. Many of these artifacts, curios, and wonders related to anecdotes and stories in the doctor's personal journals. Others, when shown to the doctor's friends, elicited further tales from a life like no other.

Thus, in keeping with the bold spirit exemplified by Dr. Lambs­head and his exploits, we now proudly present highlights from the doctor's cabinet, reconstructed not only through visual representations but also through exciting stories of intrigue and adventure.

A carefully selected group of popular artists and acclaimed, bestselling authors has been assembled to bring this cabinet of curiosities to life

Boneshaker by Cherie Priest
Description:
In the early days of the Civil War, rumors of gold in the frozen Klondike brought hordes of newcomers to the Pacific Northwest. Anxious to compete, Russian prospectors commissioned inventor Leviticus Blue to create a great machine that could mine through Alaska’s ice. Thus was Dr. Blue’s Incredible Bone-Shaking Drill Engine born.

But on its first test run the Boneshaker went terribly awry, destroying several blocks of downtown Seattle and unearthing a subterranean vein of blight gas that turned anyone who breathed it into the living dead.

Now it is sixteen years later, and a wall has been built to enclose the devastated and toxic city. Just beyond it lives Blue’s widow, Briar Wilkes. Life is hard with a ruined reputation and a teenaged boy to support, but she and Ezekiel are managing. Until Ezekiel undertakes a secret crusade to rewrite history.

His quest will take him under the wall and into a city teeming with ravenous undead, air pirates, criminal overlords, and heavily armed refugees. And only Briar can bring him out alive.

The Alchemy of Stone by Ekaterina Sedia
Description:
Mattie, an intelligent automaton skilled in the use of alchemy, finds herself caught in the middle of a conflict between gargoyles, the Mechanics, and the Alchemists. With the old order quickly giving way to the new, Mattie discovers powerful and dangerous secrets - secrets that can completely alter the balance of power in the city of Ayona. However, this doesn't sit well with Loharri, the Mechanic who created Mattie and still has the key to her heart - literally!

A steampunk novel of romance, political intrigue, and alchemy, The Alchemy of Stone represents a new and intriguing direction by the author of the critically-acclaimed The Secret History of Moscow. 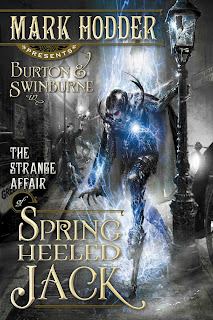 It is 1861, and Albertian Britain is in the grip of conflicting forces. Engineers transform the landscape with bigger, faster, noisier and dirtier technological wonders; Eugenicists develop specialist animals to provide unpaid labour; Libertines oppose restrictive and unjust laws and flood the country with propaganda demanding a society based on beauty and creativity; while The Rakes push the boundaries of human behaviour to the limits with magic, sexuality, drugs and anarchy. Returning from his failed expedition to find the source of the Nile, explorer, linguist, scholar and swordsman Sir Richard Francis Burton finds himself sucked into the perilous depths of this moral and ethical vacuum when the Prime Minister, Lord Palmerston, employs him as "King's Spy." His first mission: to investigate the sexual assaults committed by a weird apparition known as Spring Heeled Jack; to find out why chimney sweeps are being kidnapped by half-man, half-dog creatures; and to discover the whereabouts of his badly injured former friend, John Hanning Speke. Accompanied by the diminutive and pain-loving poet, Algernon Swinburne, Burton's investigations lead him back to one of the defining events of the age: the brutal assassination of Queen Victoria in 1840; and the terrifying possibility that the world he inhabits shouldn't exist at all.
So, what is on your steampunkery, wishlist this week?
Oh and if you would like to win some steampunk books, just look below my header to find all the giveaways for this week!
Posted by Melissa (Books and Things) at 12:00 AM

Email ThisBlogThis!Share to TwitterShare to FacebookShare to Pinterest
Tag! You're it!: Steampunk, Wishlist