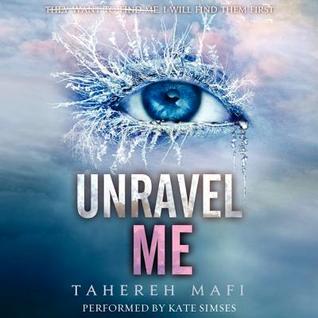 it's almost time for war.

Juliette has escaped to Omega Point. It is a place for people like her—people with gifts—and it is also the headquarters of the rebel resistance.

She's finally free from The Reestablishment, free from their plan to use her as a weapon, and free to love Adam. But Juliette will never be free from her lethal touch.

Or from Warner, who wants Juliette more than she ever thought possible.

In this exhilarating sequel to Shatter Me, Juliette has to make life-changing decisions between what she wants and what she thinks is right. Decisions that might involve choosing between her heart—and Adam's life.

I'm glad I read the prequel and it did set things up nicely for this book. So, do get to that one first if you can. And yes, this one does set up things for the dreaded love triangle. I don't like triangles, but I don't have the aversion to them as others have when immediately hearing a series or a book has them. I've actually read good triangle books but I will concede that they are few in number. And how do I feel about this one? I'm not sure. It is too early to tell, but so far I'm intrigued by how it is set up. In some ways it makes sense depending on who Juliette decides who she IS in the end. She is still a child, growing and learning so she has things to think about. Even though she gets jumbled up in her head and needs to leave that space more often, she still finds a way to figure out, in baby steps, who she wants to become as she learns more about her world. Now, that I do appreciate and that is really what drives me along in the book. The triangle for me is just another way for her to explore herself more even if you might get frustrated with her confusion from time to time. It is good to remember her formative years were quite stunted.

I admit this one took me a while to get though. It was no fault of the book, and I was always glad to get back to it, but I also didn't have a problem letting it go from time to time. Still, by the end of the book I was very curious to how Juliette would progress and how all her friends fit in it.

I give this audiobook 4 stars. The narrator, Kate Simses, does the voicing of the various characters well and it is easy to get lost in her telling of the story. I really like how they took this visual book and made it work in audio. I do think I'll continue this one on audio if I can and it does look like the library has the next two. I do recommend the audiobook format.

Email ThisBlogThis!Share to TwitterShare to FacebookShare to Pinterest
Tag! You're it!: audio, mutant, Romance, YA