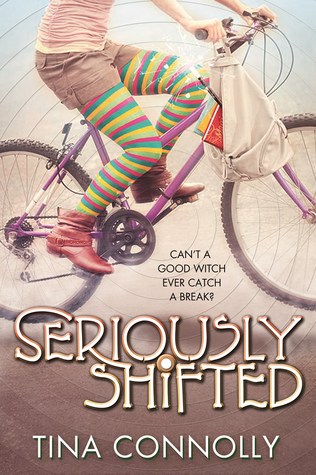 
A sparkling new adventure about teen witch Camellia and her mother, wicked witch Sarmine, introduced to readers in Seriously Wicked

Teenage witch Cam isn’t crazy about the idea of learning magic. She’d rather be no witch than a bad one. But when a trio of her mother’s wicked witch friends decide to wreak havoc in her high school, Cam has no choice but to try to stop them.

Now Cam’s learning invisibility spells, dodging exploding cars, and pondering the ethics of love potions. All while trying to keep her grades up and go on a first date with her crush. If the witches don’t get him first, that is.
Can’t a good witch ever catch a break?

I had not read the first book in this series and I had a feeling I would be okay skipping it. I was so you should have no problems if you haven't read the first book (although I know it's gotten good reviews).  I did read her Ironskin series and enjoyed them so that was another reason I took a chance on this book, plus I was in the mood for something light.

The book as a whole is YA but it reads quite young. I would think that mature MG kids could read this one with no problems. While the themes weren't too mature, there was some alcohol in the book even though Cam was against underage drinking. I would probably suggest those that are on the fence about letting their kids read it try it first before deciding. If nothing else you will have read a entertaining book yourself.

Within the story Cam is determined to be a good witch despite being surrounded by "wicked" witches. She considers her mom a wicked witch (her mom concurs) but she is more like someone who wants her way and feels she knows what is best for everyone else. So... borderline evil. She finds that her mom's friends want to play a game in destroying her friend's lives but with an unexpected truce with her mom she figures out the most evil witch's end game and how to save everyone around her. She should be quite exhausted after trying to outthink everyone.

The secondary characters work and I really think they enhanced the story. I really liked her circle of friends and it was nice that she was able to let several of them in on her witchy secret. Sometimes the secret trope gets old quickly so that was a refreshing part of the story.

I give this book 3 1/2 stars. I enjoyed the friendship and the fun in dealing with a wicked witch while finding out what truly makes a good witch. I also enjoyed the end tidbits with the spells she had to figure out as well as her morality good witch list.

Email ThisBlogThis!Share to TwitterShare to FacebookShare to Pinterest
Tag! You're it!: magic, MG, Romance, witch, YA