Talk Dirty to Me (Plum Orchard #1) by Dakota Cassidy 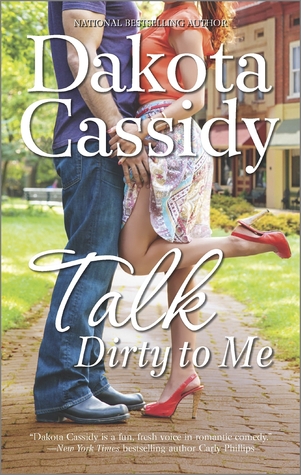 
Plum Orchard, Georgia, is about to get even juicier…

Notorious mean girl Dixie Davis is back in town and it's payback time. Literally. Dixie is flat broke and her best—make that only—friend, Landon, is throwing her a lifeline from the Great Beyond. Dixie stands to inherit his business…if she meets a few conditions:

She's got to live in Landon's mansion.

With her gorgeous ex-fiancé, Caine Donovan.

Who could also inherit the business.

Which is a phone sex empire.

Landon's will lays it out: whoever gets the most new clients becomes the owner of Call Girls. Dixie has always been in it to win it, especially when it comes to Caine, who's made it clear he's not going down easy. (Oh, mercy.) Can Dixie really talk dirty and prove that she's cleaned up her act? Game on!

My thoughts:
I have to admit, I don't usually like books about mean girls but this was Dakota Cassidy and Dixie was a reformed mean girl. Oh growth! I do like that in books and I was also wanting a good romance so I gave it a try and was glad that I did.

In the story I did immediately like Dixie, the reformed mean girl. There were times when I didn't like that she allowed people to walk all over her because she felt it was her punishment for past deeds, but she did come to the aid and protection to those around her so it was easy to forgive her even when you were pushing for her to stand up for herself. I also did like the way she handled the intense scrutiny and prejudice she endured because of her past reputation. That also solidified my affinity for this character. She was still exploring who she was, and she did it with as much honesty as she could.

I didn't always like Caine, Dixie's ex, because of the way he treated her even though we knew they had a past where he got hurt. You could understand why he was angry, but knowing the Dixie we were introduced to now, it just seemed excessive. However, you will be happy to know that he does redeem himself in spades in the end. It just had to take some time.

The secondary players were some of my favorites. Em, someone who was bullied by Dixie in high school did give her grief for her past deeds, but was the first to also come around knowing that Dixie had changed. She was also a cutie and I hope the next book is about her. The other main secondary character was Landon, their deceased friend. Oh that one kills me because he won't get any books with his romance. He was a hoot even in death and someone who lived large and didn't give a damn about what others thought of him. A character I would have loved to have known better.

In the end, I really enjoyed this book even more than I thought I would from the beginning. I give the book 4 1/2 stars and recommend it to those that are looking for a good contemporary romance set in a small town.
Posted by Melissa (Books and Things) at 12:00 AM

Email ThisBlogThis!Share to TwitterShare to FacebookShare to Pinterest
Tag! You're it!: adult, contemporary, Romance