Maliha Crayne, the main character of the Mortal Path series, is on a journey back to humanity. She started out as wife, healer, and mother-to-be in the American colonies in the laste 1600s. She was betrayed by her townsfolk and one woman in particular, a woman who wanted Maliha out of the picture in order to claim Maliha’s husband. Dramatic events turned Maliha into a person who sold her soul to an ancient Sumerian demon, who promised her immortality in exchange for doing his bidding. She became Ageless, with special powers to help her perform the demon’s killing assignments, and she was no longer human. For hundreds of years she used humans for her purposes, whether it was to keep her in good standing with the demon, to accumulate wealth, or for sex. From her viewpoint, things were sweet and there was no reason to change. Life went by decade after decade as she stayed young and beautiful.

Gradually, the woman she had been began to resurface. Her decadent life felt shallow and she found the assassination assignments she was given more and more abhorrent. Finally, she was given an assignment she couldn’t bear to carry out, so she confronted her demon and broke her contract, expecting to die. Instead, she found that the demon’s ruling god had forced a clause into her contract, a way out, a way to reclaim her soul. An unlikely one, but a chance at which she could grasp. She had to save a life for every life she’d taken under the demon’s command. She took the deal and started her long journey on the mortal path, a quest to recover her humanity and redeem her soul. So we have a woman who wants to be human with all of her heart, who longs for normal relationships, friends, a soulmate, a family—to just return to being human.

There’s a TV program on the SyFy channel called “Being Human,” modeled after a popular British drama of the same name. In it, Aidan, a vampire, and Josh, a werewolf are roommates. They are joined by Sally, a ghost who haunts the premises. Sally was engaged to the landlord, who killed her, and she is now stuck in the home. It’s a violent, sexy show, but I can’t complain because the Mortal Path contains both of those elements.

The question is, are these characters sincere in wanting to restrain their paranormal natures, or are they just mouthing the words? Speaking of mouthing the words, here is something Aidan has said: “Nothing else in the world feels better than giving in to your inner monster.” Aidan is a little younger than Maliha, and swore off drinking live blood sometime before the series started on TV. That doesn’t seem to have stopped him from nipping an occasional mouthful, although he has used his powers in a few instances to kill baddies. Currently having an affair with Suren, the 700-year-old daughter of Mother, a supremely powerful vampire, Aidan seems to be responding as Suren tries to lead him back into the normal ways of vampire life. I give him a 2 out of 10 for trying to be human.

Josh, the werewolf, can’t control his monthly full-moon transformations, so all he can do is try to be in a place where he won’t harm anyone when he does transform. A group of vampires forced Josh into a fight with another were, and he won, killing the other werewolf. Josh seemed genuiinely upset by this, to his credit. He transformed his girlfriend into a werewolf because he had been trapped in a room with her when he transformed, and he scratched her. A major setback for Josh! When his girlfriend became pregnant, Josh planned to go to medical school to support his family, some positive points for him. When she loses the baby, he decides to cancel his plans and instead devote himself to finding a cure for lycanthropy. Somehow the viewer never gets much faith that Josh will succeed, and is only fooling himself. I give Josh a 4.5 out 10 rating for trying to be human.

Sally started the series as an insecure ghost who hadn’t come to terms with the facts of her own death. She grows more knowledgable about her powers and figures out that her then-fiancé killed her. Scheming with Aidan, she gets the man to turn himself in to the police for her murder. All seems well, and then Sally takes a weird turn in the story. After missing her chance to move on through her white door, she gradually finds out that she has a dark side in her, a Reaper who harvests the spirits of other ghosts, punching them through the heart and preventing them from achieving their own white doors. She also learns to possess live peoples’ bodies and does it for casual reasons like enjoying sex. I give Sally a .5 out of 10 for trying to be human. ;-)

On average, then, the characters seem to me to be 23% sincere in their quest to be human, mostly because of Josh. I’d say the TV show uses its paranormal characters to show that the title “Being Human” is ironic—they may struggle, but can’t alter their basic natures, at least not much.

Since I know Maliha well, I can say that she’s about 95% determined to walk the Mortal Path. Every now and then she thinks how much easier her goals would be to accomplish if she slipped back into the methods used by the Black Ghost, the nickname she had as the demon’s assassin. No worrying about peoples’ feelings. Not caring if there’s collateral damage on her missions. Not having to be concernced about the safety of her friends. There’s a lot of freedom in operating as the Black Ghost, but there isn’t any humanity in it.

If you’ve seen the “Being Human” program, what’s your opinion of it? Is it truly a quest for humanity by Aidan, Josh, and Sally?

Newest book in the series:


A demon's assassin for centuries, Maliha Crayne has gone rogue, determined to save a life for every one she's destroyed in order to free herself from an eternity of enslavement, damnation, and excruciating torment. But as the powers that sustained her in the past fade, she is wary of trusting those closest to her-especially her lover, Jake. Should Maliha listen to her heart or the alarms going off in her head? Then her closest friends begin to disappear, one by one. Amid her anger, suspicion, and sorrow, she feels her life spiraling out of control.

Worse still, a beautiful, Renaissance murderess is recruiting Maliha as her new assassin. Maliha is turning into a lethal puppet with an evil Immortal pulling the strings, forced to kill innocents or see her missing friends die horribly. Suddenly trapped in a moral no-man's land, Maliha is damned if she does and damned if she doesn't…and time is rapidly running out.

Other books in the series:
Dark Time (Mortal Path #1)
Sacrifice (Mortal Path #2)
Giveaway!!
You are going to love this giveaway! First, it's INTERNATIONAL and second... you get all 3 books signed plus a swag pack! I'm going to be so jelly of the winner! 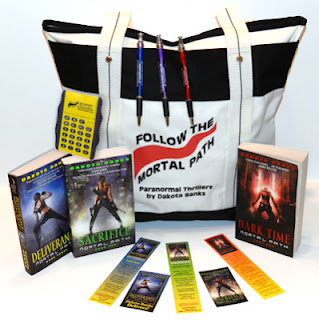 So sweet! How to enter? Just fill out the rafflecopter form below! Good luck!