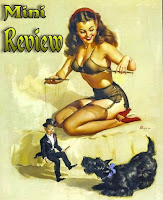 Bigtime, New York, is not big enough for both Carmen Cole and the superheroes and ubervillains who stalk its streets. An intrepid reporter, Carmen's dedicated her life to unmasking the spandexwearers, all because her fiancŽ turned out to be a superhero, and a cheating one at that-sleeping with none other than his nubile nemesis.

Exposing the true identities of the nation's caped crusaders and their archenemies has catapulted Carmen from her sleepy southern hometown to the front pages of the country's biggest newspaper, The ExposŽ. Hobnobbing with millionaires and famished fashionistas is all in a day's work for a woman on the trail of the Fearless Five and Terrible Triad. But when Carmen gets the scoop of her career, her life comes crashing down around her. And even Bigtime's sexiest superhero, Striker, may not be able to save her.

When I got a chance to review this series I jumped at it! I've been so curious and became even more so when I got a couple of quick references to "Karma Girl comics" in the Elemental Assassin Series and The Mythos Academy Series. So, the question remains... did I enjoy this book? Oh yes I did! It was a fun adult book with a couple of smexy scenes within. It was fun, campy without being over the top and completely entertaining. Yes you figure out the identities of the superheros and ubervillians way before the characters do, but quite honestly that was part of the point of the book. If you think about it, really, it is any different than what you get in comic books? Seriously... how many people were fooled by Superman's glasses? LOL

I give this book 5 stars. I recommend it to anyone looking for something fun to read that doesn't take itself too seriously.
Alternative covers:

By day, Fiona Fine is a successful couture designer, catering to the high society players of Bigtime, New York. By night, she's Fiera, a member of the heroic Fearless Five who can create and manipulate fire with her bare hands.

Fiona's personal life, though, isn't so hot. She still misses her fiancŽ, who was killed by ubervillains a year ago. Still, men admire Fiona's smoking assets, and she decides to get back in the dating game- especially after she meets Johnny Bulluci. But this notorious playboy has plenty of secrets to go along with his sexy smile. And, with two new ubervillains in town who are intent on raising hell, Fiona's love life might just crash and burn.

This book takes place after the first one, but is more about Fiera (Fiona) and Johnny Angel. It still is campy and fun as the first, but I have to admit, I didn't "warm" (heh) up to Fiona as I did Carmen in the first book. I liked her well enough and enjoyed her story, but I think she is just a bit too much on the selfish side for me. Still, I would have missed this story if it wasn't told. I enjoyed seeing how she took her broken heart and mended it, kicking Johnny's ass and dealing with a new love. And despite what I said about her selfishness, she finds her heart as well within this story. How that all comes out you'll just have to read it to find out. I give this one 4 stars.
Alternative Covers:

Thanks to her unwanted superpower, fashion designer Bella Bulluci may be the luckiest woman in Bigtime, N.Y. But luck can be good or bad, and it seems like just as many embarrassing things happens to Bella as do positive ones.

Like when a charity event that Bella plans get crashed by Hangman, a deadly ubervillain who's after a prize sapphire that's on display. Hangman almost succeeds in stealing the jewel for his evil ubervillain boss, Prism, but Bella's luck helps her escape with the sapphire star along with some help from the suave and charming Debonair.

Debonair's not an ubervillain, but he's not really a superhero either. Still, Bella can't help but fall for him, despite her personal vow to have as little to do with heroes and villains as possible. But with Hangman and Prism still after the sapphire, Bella's going to need every bit of her luck power just to survive ...

This was another fun book. I really enjoyed Bella and her dislike of all things super. Either villain or hero. However, Debonair makes Bella reconsider things once he has her in his "den of seduction". She isn't the type to go after someone who seduces many women for the thrill... but something about him attracts him despite her aversion. This combo makes it for another fun book. One where we see if two very shy people can overcome their "press" and make a connection.

My only complaint was Bella's attitude with her body. She constantly complained and worried over nothing. However, it is resolved in the end and don't we all know someone like that? ;D I also wanted to kick Debonair in the @ss and liked him but didn't (if that makes sense) until he was fully himself. In other words, when he was neither Debonair or his alter identity but his true self to Bella did I enjoy and root for him fully. I really LOVED him then.

I give this book 4 1/2 stars and recommend this book to anyone who loves a fun campy book.

All these books are currently $2.99 in ebook format.
Amazon, B&N, Kobo
I was given all 3 ebooks from the author for my reviews and no compensation was given.
Posted by Melissa (Books and Things) at 12:00 AM

Email ThisBlogThis!Share to TwitterShare to FacebookShare to Pinterest
Tag! You're it!: superhero