Protect the Prince by Jennifer Estep 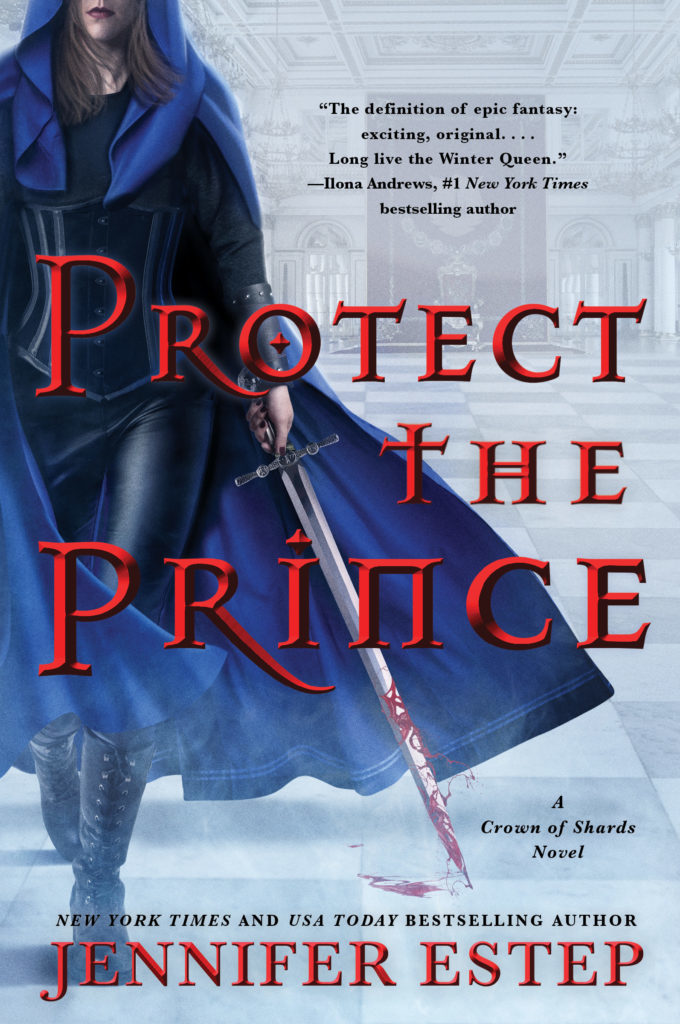 First, Evie has to deal with a court full of arrogant, demanding nobles, all of whom want to get their greedy hands on her crown. As if that wasn’t bad enough, an assassin tries to kill Evie in her own throne room.

Despite the dangers, Evie goes ahead with a scheduled trip to the neighboring kingdom of Andvari in order to secure a desperately needed alliance. But complicating matters is the stubborn Andvarian king, who wants to punish Evie for the deaths of his countrymen during the Seven Spire massacre.

But dark forces are at work inside the Andvarian palace, and Evie soon realizes that no one is safe. Worse, Evie’s immunity to magic starts acting in strange, unexpected ways, which makes her wonder whether she is truly strong enough to be a Winter Queen.

But Evie’s magic, life, and crown aren’t the only things in danger—so is her heart, thanks to Lucas Sullivan, the Andvarian king’s bastard son and Evie’s . . . well, Evie isn’t quite sure what Sullivan is to her.

I loved the first book and I couldn't wait to get to this one. I was not disappointed and loved this book too. Also note that  I will try to make sure I don't spoil anything... which will be hard.

The book picks up right after the last book and it is filled with lots of action. Evie is no wilting royal and protects herself well (both mentally and physically) and has a great mind for sussing out mystery. There is a mystery in the book which was unfortunately not hard to figure it out, however, this really wasn't an issue as it was only a part of the whole story and it all fits together so well. In other words, it was a well executed mystery despite it's ease.

I will also say that if you are reluctant to start a fantasy but really enjoy UF, give this series a try. It feels more UF and isn't a heavy handed book at all. Also, for those wanting romance, there IS romance in the book even though it was frustrating for most of the book. Still loved how it turned out for at least 2 couples. I also suggest you read the first book as these really do need to be read in order like most fantasy.

I give this book 5 stars and I really love these characters (which you will find more to love) and how Evie's brain works. I can't wait for the next installment.