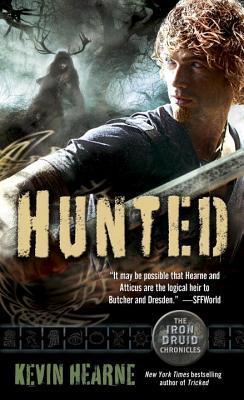 For a two-thousand-year-old Druid, Atticus O’Sullivan is a pretty fast runner. Good thing, because he’s being chased by not one but two goddesses of the hunt—Artemis and Diana—for messing with one of their own. Dodging their slings and arrows, Atticus, Granuaile, and his wolfhound Oberon are making a mad dash across modern-day Europe to seek help from a friend of the Tuatha Dé Danann. His usual magical option of shifting planes is blocked, so instead of playing hide-and-seek, the game plan is . . . run like hell.

Crashing the pantheon marathon is the Norse god Loki. Killing Atticus is the only loose end he needs to tie up before unleashing Ragnarok—AKA the Apocalypse. Atticus and Granuaile have to outfox the Olympians and contain the god of mischief if they want to go on living—and still have a world to live in.

If you haven't tried these books on audiobook, I do suggest you try at least one. I do love Luke Daniel's narration of this series and he is the voice of Atticus in my head. His rendition of Oberon is always spot on and is capable of making me laugh. Like most male narrators, it takes me a while to get used to his female voices but it didn't take me long (like usual) to just fall into the flow and it didn't bother me at all in a few minutes.

The humor of his stories was back in this one and I loved learning about his version of mythology. There was a huge twist that I didn't expect and while I knew what the outcome would have to be, I just didn't know how it would be solved.

The romance in the book was still on the back burner but definitely there. It was cute and there was also a possible partner for Atticus that did surprise but not really at the same time. Atticus, like a lot of males, was clueless until it was too late. It really did make it interesting to see his emotions about this event (which I will evilly not tell... bwa haha).

I give this book 4 stars. My biggest niggle about the book is how it ended. It didn't quite feel like a solid end to me but it wasn't really a cliffie, it just felt unfinished and abrupt although others might tell you otherwise. It just felt that way to me. I will continue the series as I'm curious as to what else Atticus, Granuaile and Oberon have in store for us all next.

Email ThisBlogThis!Share to TwitterShare to FacebookShare to Pinterest
Tag! You're it!: adult, audio, Faerie, fantasy, mythology