Blade of Darkness by Dianne Duvall

Dana Pembroke has been able to glimpse the future of those she touches for as long as she can remember. But she never saw Aidan coming. When the tall, dark Celt with the charming grin yet world-weary eyes walks through her door, the future she sees for him is one full of violence, danger, deception... and passion. Because amidst the terrifying battles that unfold in her visions, she also sees herself in Aidan's arms and in his bed. Dana knows she should keep her distance, but the tender moments and laughter they share entice her even as she finds herself thrust into a world of vampires, immortals, and other preternatural beings.


Immortal Guardian Aidan O'Byrne has been hunting and slaying psychotic vampires for nearly three thousand years, so visions of bloody battles don't trouble him. The battles Dana foresees, however, show Aidan's brethren turning against him, so he can't help but feel alarmed. While he spends as much time as he can with Dana, struggling to decipher her dire predictions, Aidan finds himself utterly smitten. Hope rises that he has finally found a woman who can banish the darkness and loneliness that plague him. But when vampires begin targeting Dana and a powerful enemy spawns chaos, will fate grant them time to find happiness together?

Oh another addition to this wonderful series. Seriously, if you haven't started this one yet you are missing out on some great action and romance. In this book we get Aiden's story. A hunky Celt who has recently joined the ranks of Seth's Immortals. We got to know a bit of him through the other stories and found his longing for a romantic companion very swoony.

Okay, now I have a problem reviewing this book. Not because I didn't like it, but because I did and I'm TRYING not to spoil anything from this book or from previous books. So what to do...

Aidan appears vulnerable in how he is trying to meet the right woman which is adorable. We see him woo Dana and her reactions to the world she gets thrust into. Oh and I should also say that Dana is a great addition to this series as well. Not a shrinking violet but someone who takes no guff and protects those that she loves. There are also quite a few humorous moments within this greeting as well.

The action does seem less harrowing than in the other books but there was still one instance where I was thrown which also led me to believe that not everyone may be safe in the end of the series. Granted they might be as well, but it shows that the author is willing to risk some of her characters and keep us on the edge of our seat.

I don't think that spoiled it too much... you have no idea how much I wanted to say!

I give this book 4 1/2 stars. It is a great series that I suggest starting from the beginning. Not only do the characters develop throughout the series but so does the mysterious story arc connecting all the books. You could get away with reading this one without the rest, but I have no doubt that you would feel as though you missed some good story telling and you would be right. Therefore, get the whole series! I highly recommend it.

Don't forget to check out the blog tour post on the blog. There is a good excerpt there! Just click HERE or on the pic below: 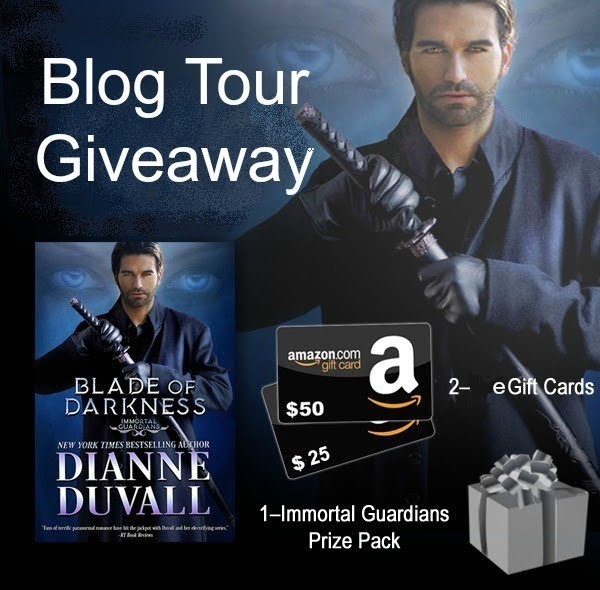 Check out the excerpt and the prizes!

Email ThisBlogThis!Share to TwitterShare to FacebookShare to Pinterest
Tag! You're it!: psychic, Romance, Vampire