I actually became inspired by a pin in Pinterest on making an electronics charging station. Here is the pin and my result...

This was the pin by Design Sponge I was inspired by:

There were a few things I changed and this was my result: 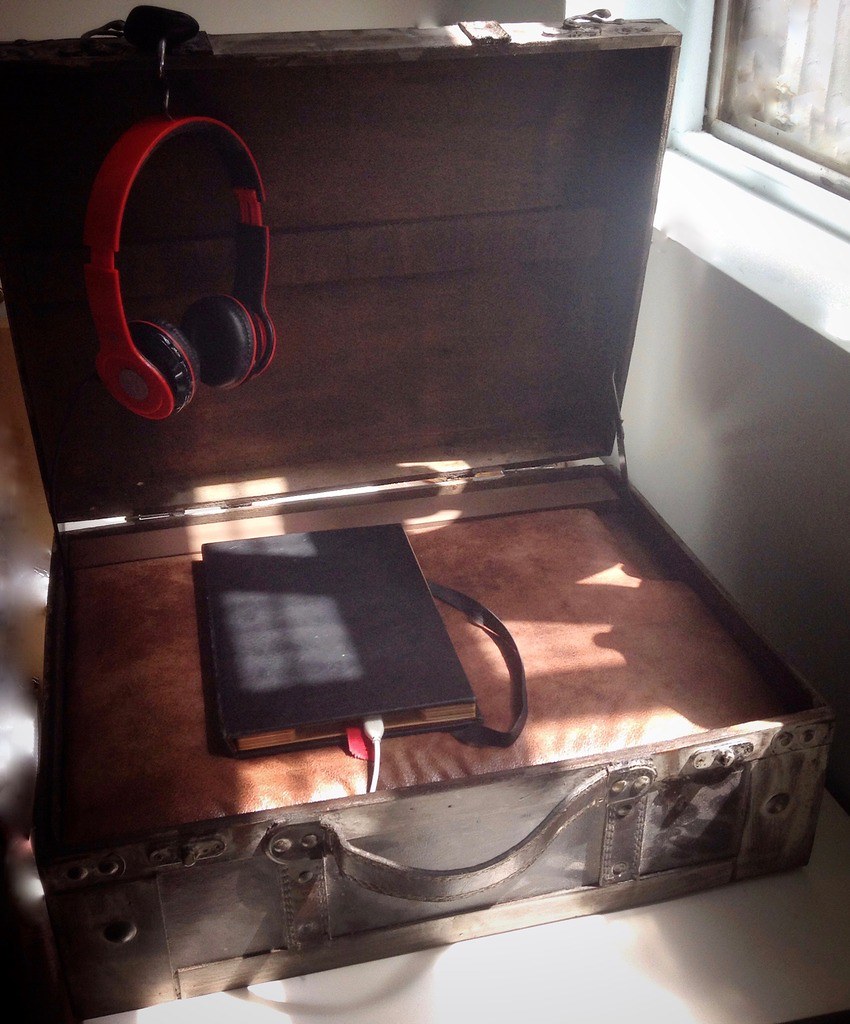 Sorry for the lighting, but it was the best I had at the last moment and where I have it, it is too dark for pics. I still need to set up a spot to take better pics, until then, please bear with me.

The case is something my mom got me a million years ago from Hobby Lobby when they were on sale (I have no idea if they still have these) to store things in but I thought it would be perfect for this project.

I used grommets for the opening in the back like the pin suggested. It was a good sized opening and I'll be able to not only fit the large plug from the surge protector power strip, but I'll also be able to thread wires back out for those things that I wouldn't put in the box.
The headphones were attached to a shower hook that I had which fits semi-securely on the top (not for a lot of movement, but stationary it will be fine). The box can be closed (without hook) just like it came.

The part where I deviated the most was the place where I will lay my ereader on. In the pin they had you use white peg board and it already had a place to lay this top piece. I just glued (Gorilla wood glue and a couple of small clamps) a couple of 1 1/2" boards cut to the side areas for my shelf just under the metal pieces they had to give the case stability. I then used foamcore cut to the size of the shelf (cutting a section out for the hinge so it didn't interfere with that area), minus the 1 1/2" board in the back for a bit of extra stability, added one layer of batting on top of that and then hot glued the fabric on top of it and then added a piece at the bottom to make it look nicer even though you won't see it. The fabric I used is a very thin microsuede I got from the remnant section at Joann's (hint: the remnants are usually 50% off and if you find the fabric in in a section that is on sale, you get that % off as well). Also, because I used foam core and the box isn't completely square in the front, I have a small space which I can thread my wires through to the items that need to be charged. I did add a small tab so I can easily lift it to sort things out in the storage area.

Hope you liked my wordy explanation! 😊

So this is my pinspiration! Have you done any projects from Pinterest?