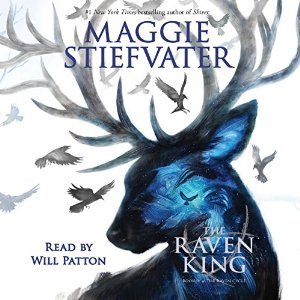 
The fourth and final installment in the spellbinding series from the irrepressible, #1 New York Times bestselling author Maggie Stiefvater.

All her life, Blue has been warned that she will cause her true love's death. She doesn't believe in true love and never thought this would be a problem, but as her life becomes caught up in the strange and sinister world of the Raven Boys, she's not so sure anymore.

This one was surprising. All of the books did seem to lead up to this one and the writing followed through beautifully. In one way it felt like stream of consciousness writing where things seem disjointed and pulled together at once, but in a closer look, it fits the story of finding a mythical king in a mythical forest surrounded by his magicians. Did we find the king? No and then yes. Did he grant the wish. No and then yes. All things flowed in this direction gave you the answer you didn't want and then find that it was the only answer you could have gotten. Curious? I hope so.

This is a series that must be read in order. You need that order to get to know all the characters in the book. Not everyone gets an HEA but then there was no way a mythic journey could grant all HEAs in a story. Some sacrifices were made and some were taken. You also find unexpected twists that you didn't know you wanted until it happened. I loved the romantic twists in the end and it just felt right even though it took you (and the characters) by surprise. This is one dream that you weren't sure you wanted it to end even though you know how you wanted it to end.

Will Patton also does an exceptional job voicing all the characters and setting the tone of the story. I really enjoyed listening to him tell this tale. This was a good story on audio.

I give this last installment 4 stars. Despite what I said above I would have liked a bit more coherence in some of the aspects of the story. I did like the dream-like state of the characters world, but they also had to function somewhat in ours and that is where I would have liked it to come together a bit better. However, this really is a small niggle and one series I do think ended well. I highly recommend it to those that enjoy YA stories of mythic proportions.
Posted by Melissa (Books and Things) at 12:00 AM

Email ThisBlogThis!Share to TwitterShare to FacebookShare to Pinterest
Tag! You're it!: audio, ghost, library, Maggie Stiefvater, magic, Romance, YA