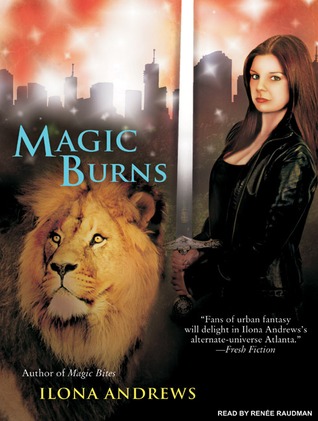 As a mercenary who cleans up after magic gone wrong, Kate Daniels has seen her share of occupational hazards. Normally, waves of paranormal energy ebb and flow across Atlanta like a tide. But once every seven years, a flare comes, a time when magic runs rampant. Now Kate is going to have to deal with problems on a much bigger scale: a divine one.

When Kate sets out to retrieve a set of stolen maps for the Pack, Atlanta's paramilitary clan of shapeshifters, she quickly realizes much more is at stake. During a flare, gods and goddesses can manifest and battle for power. The stolen maps are only the opening gambit in an epic tug-of-war between two gods hoping for rebirth. And if Kate can't stop the cataclysmic showdown, the city may not survive.

My thoughts:
I had a much easier time in the world this time. While things aren't completely explained, I did feel like it flowed much better. A few new characters were introduced to the mix which became some great secondary characters I am looking forward to seeing more of as the series goes on. Loved Bran, Andrea and Aunt B. Yes, you can say I really enjoyed these characters.

The action was intense and Curran was still an arse. No romance yet, but you can see it brewing and some hints about it coming. Oh I don't want to give too much away, but I have a feeling that it is this book when the series really starts. I had fun with it and can't wait for the next installment. Renée Raudman does such a great job with such great emotional inflection. I will do the next one on audio because of her narration. I give this book 4 stars.
Posted by Melissa (Books and Things) at 12:00 AM

Email ThisBlogThis!Share to TwitterShare to FacebookShare to Pinterest
Tag! You're it!: adult, audio, fantasy, magic