Madly in Love Tour for The Evolution of Mara Dyer

QUOTE:
He only ever shows you what he wants you to see. 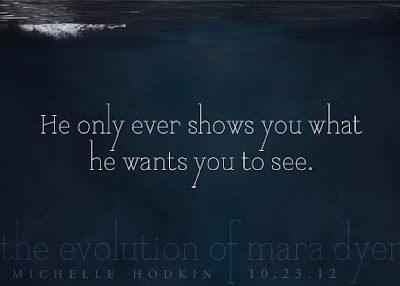 QUESTIONS:
Mara, you have a very tight family bond - which of your family is the most important one for you?

You can't choose which of the people you love is most important to you. They're family. They're equally important. But I'm closest to Daniel.

Mara, can you share with us one quirk or habit Noah has that we don’t know about?

He won't watch movies or read books where the dog (or cat) dies. He'll abandon the book or walk out of the room.

The Evolution of Mara Dyer


Mara Dyer once believed she could run from her past.

She used to think her problems were all in her head.

She couldn’t imagine that after everything she’s been through, the boy she loves would still be keeping secrets.

In this gripping sequel to The Unbecoming of Mara Dyer, the truth evolves and choices prove deadly. What will become of Mara Dyer next?

At the age of sixteen, Michelle Hodkin lost the rights to her soul in a poker game with pirates just south of Natchez. Shortly thereafter, she joined an acting troupe and traveled the world performing feats of wonder and mischief. She has been seen on stages nationwide and earned rave reviews for her one woman performance of Titus Andronicus before writing The Unbecoming of Mara Dyer, her first novel which is available now. The sequel, The Evolution of Mara Dyer, hits shelves October 23, 2012, and the third book in the trilogy, The Retribution of Mara Dyer, hits shelves Fall 2013. Michelle currently lives with her three pets and may or may not be a reliable narrator of her own life.

The tour is giving away 1 Copy of The Evolution of Mara Dyer and some epic Super Secret Swag of Awesome! Just fill out the rafflecopter form below to enter!
a Rafflecopter giveaway
Posted by Melissa (Books and Things) at 12:00 AM