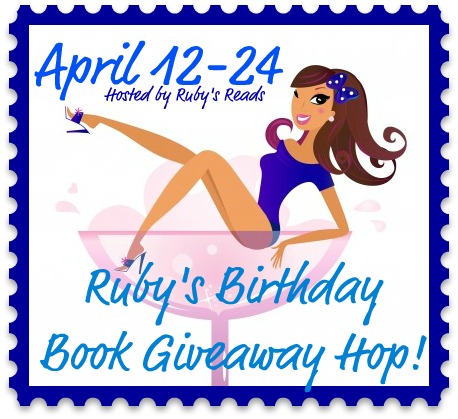 Happy Birthday Ruby!!
She is celebrating with you! How cool is that?
So... I'm helping Ruby of Ruby's Reads celebrate her birthday!!
For this stop... I'm giving away the ebook of...


The Hematoi descend from the unions of gods and mortals, and the children of two Hematoi-pure-bloods-have godlike powers. Children of Hematoi and mortals-well, not so much. Half-bloods only have two options: become trained Sentinels who hunt and kill daimons or become servants in the homes of the pures. Seventeen-year-old Alexandria would rather risk her life fighting than waste it scrubbing toilets, but she may end up slumming it anyway. There are several rules that students at the Covenant must follow. Alex has problems with them all, but especially rule #1:Relationships between pures and halfs are forbidden. Unfortunately, she's crushing hard on the totally hot pure-blood Aiden. But falling for Aiden isn't her biggest problem--staying alive long enough to graduate the Covenant and become a Sentinel is. If she fails in her duty, she faces a future worse than death or slavery: being turned into a daimon, and being hunted by Aiden. And that would kind of suck.

Why? Well, first, I think the series rocks. The second one just came out and for those yet to read it, I thought you needed to get started NOW! I did like this book more than Ruby did and this is also my way of telling her she needs to read the second book. The tension she wanted I do believe is there in Pure. ;) You will like Seth in that one. :D
Anyhoo... my giveaway is international because it is an ebook. I'll be giving it away through Amazon or B&N. Just fill out the rafflecopter form below!
Don't forget to check out the other participants:
Ruby's Blog Hop Page