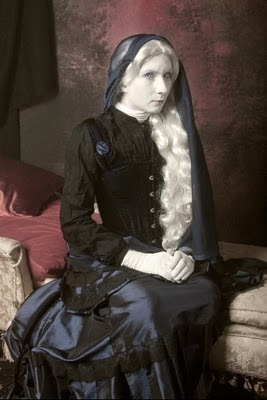 From Goodreads: What fortune awaited sweet, timid Percy Parker at Athens Academy? Hidden in the dark heart of Victorian London, the Romanesque school was dreadfully imposing, a veritable fortress, and little could Percy guess what lay inside. She had never met its powerful and mysterious Professor Alexi Rychman, knew nothing of the growing shadows, of the Ripper and other supernatural terrors against which his coterie stood guard. She saw simply that she was different, haunted, with her snow white hair, pearlescent skin and uncanny gift. This arched stone doorway was a portal to a new life, to an education far from what could be had at a convent-and it was an invitation to an intimate yet dangerous dance at the threshold of life and death...

This first book in the series had me captured pretty quickly. You can tell that Leanna Hieber has done her homework as the book really does capture the essence of those 18th century romantic novels. In fact the prose was quite poetic. She was also able to fully introduce the paranormal aspects within the book while keeping to the time period. Persephone Parker is true to her name and what happens within the book keeps pretty true to the mythical story. There are a few twists and turns within to make it it's own mythology to be explored and learned, but just enough left over to keep it honest. Alexi makes a great counterpart for Percy. I love that you also get to see a bit into his heart in this voyage as well. The other characters consisting of the guard do not play a big role within this book, but yet they play an important one. I knew they would play a bigger part as the saga moves on in the stories.
I give this book 5 stars and really don't want to say much more about the book. Reading it is it's own reward! Those looking for a true romance really need to look no further and pick up this book. Those looking for a great PNR also need to look no further. This one is it. It is full of romance of a time gone by with lots of mystery in the paranormal added to it.
What is great is at this time Barnes and Noble have the ebook for FREE! Either go to the site and click on free ebooks area or just click HERE.

From Goodreads: With radiant, snow white skin and hair, Percy Parker was a beacon for Fate. True love had found her, in the tempestuous form of Professor Alexi Rychman. But her mythic destiny was not complete. Accompanying the ghosts with which she alone could converse, new and terrifying omens loomed. A war was coming, a desperate ploy of a spectral host. Victorian London would be overrun. Yet, Percy kept faith. Within the mighty bastion of Athens Academy, alongside The Guard whose magic shielded mortals from the agents of the Underworld, she counted herself among friends. Wreathed in hallowed fire, they would stand together, no matter what dreams or nightmares—may come.

This book is the second in the series. And so, when the first one ended, I knew I'd want to read more, so I had already purchased this book and I started it immediately! This is also why I decided to review them together.


If the talk of war in the first book made you think, "that was it?" then you know you are in for a huge ride with this book. In this one you also get to meet more of the guard in a more personal way and also see what is in their hearts they so badly hide from one another. The question with these little secrets becomes is this what can tear them apart? Can this be a betrayal not only of the heart, but of the guard or even Percy?


You also get more romance with Percy and Alexi. Lot more of Alexi's Darcy-esque manner and steamy looks he only gives Percy. Not to mention you get a little more action than you would have in those 18th century novels. ;) They do explore their relationship and what her past and his possession means to one another. I felt it was dealt with in a very adult manner which I enjoyed. All of these characterizations are important in understanding how the Guard and Percy stand a chance to beat Darkness. The question remains. Are they able to see past their own mortal hearts? Are they able to stay true to one another? Can they stand a chance against Darkness? Guess you'll have to read the book to find out.


I give this book 4 stars. It is a great companion to the first and really finishes up aspects of the first book that might have lingered. Leanna Renee Hieber has really made a great saga with these books alone. I do so hope you get a chance to read them.


Also, I came across this video interview of the author. I thought you'd enjoy. You can also find her on her web site and on twitter. The first book has also been optioned to be a part of a musical theater production!

Posted by Melissa (Books and Things) at 4:31 PM

Email ThisBlogThis!Share to TwitterShare to FacebookShare to Pinterest
Tag! You're it!: ghost, mythology