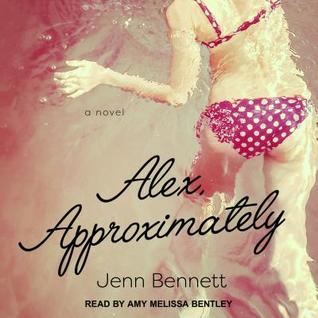 Classic movie buff Bailey "Mink" Rydell has spent months crushing on a witty film geek she only knows online by "Alex." Two coasts separate the teens until Bailey moves in with her dad, who lives in the same California surfing town as her online crush.

Faced with doubts (what if he's a creep in real life-or worse?), Bailey doesn't tell Alex she's moved to his hometown. Or that she's landed a job at the local tourist-trap museum. Or that she's being heckled daily by the irritatingly hot museum security guard, Porter Roth-a.k.a. her new arch-nemesis. But life is whole lot messier than the movies, especially when Bailey discovers that tricky fine line between hate, love, and whatever-it-is she's starting to feel for Porter...

And as the summer months go by, Bailey must choose whether to cling to a dreamy online fantasy in Alex or take a risk on an imperfect reality with Porter. The choice is both simpler and more complicated than she realizes, because Porter Roth is hiding a secret of his own: Porter is Alex . . . Approximately.

This is a YA romantic comedy and a retelling of "You've Got Mail" which is perfect for these two movie buffs. This one had me completely engaged and invested in this romance. I really enjoyed the characters and how they move from hate to sorta friends to love. This was simply a fun ride and a great audiobook. Amy did a great job narrating the story and even though I did listen at 1.5 speed I enjoyed her voice and expressions.

My only real issue was a hint of a possible "bad guy" that never amounted to much. This was supposed to affect her and give her some slight PTSD but it was pretty much dropped and I found that disappointing. I also though there would be more about her anxiety but it was solved rather abruptly. However, these actually ended up being minor niggles and I didn't want the story to end.

I give this book 4 stars. If you are looking for a good romantic summer read, then this one might be a good fun read while at the beach (can I come too? LOL)

Email ThisBlogThis!Share to TwitterShare to FacebookShare to Pinterest
Tag! You're it!: audio, contemporary, Romance, YA