Circus of the Damned 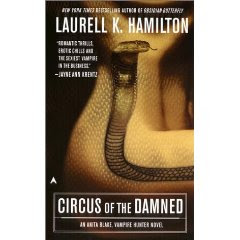 This is the third installment in the Anita Blake, Vampire Hunter series by Laurell K. Hamilton. As with the other two, this one also had a strong kick-ass woman in the lead. We find out a bit more of Anita and the monsters that exist in her world. There is also a suggestion that Anita has even more power than we have been so far been lead to believe. This is may be shown in the next books but have yet to be determined for me.

Anita's nemesis and lust interest, Jean Claude, the vampire master of the city actually bugged me in this book. He knew the way to get Anita to see him as, at least, something more than someone who is her antagonist, but refuses to rise to that level. This behavior also makes sense in the characterization of Jean Claude as he is also seen as very egotistical. There is also an introduction in a new love interest for Anita in Richard, the science teacher. I think he will make things either more interesting or more complicated for her life as the series progresses. Of course with all those choices in her personal life, she has paranatural murders to help solve, and two new master vampires to fight. Both very old masters and one of the master vampires who is impossibly old. She also encounters more werewolves and a Lamina who is an ancient "mythical" snake-like creature.

There is one thing I would like to say to future readers of this book... if you can't stand to be around snakes, be aware... there are plenty in this book. From mythical snake beasties to images of real snakes. Had to put that one in for my mother. :-)
Posted by Melissa (Books and Things) at 3:55 PM

Email ThisBlogThis!Share to TwitterShare to FacebookShare to Pinterest
Tag! You're it!: Vampire, werewolf