The Queen of Swords by R. S. Belcher 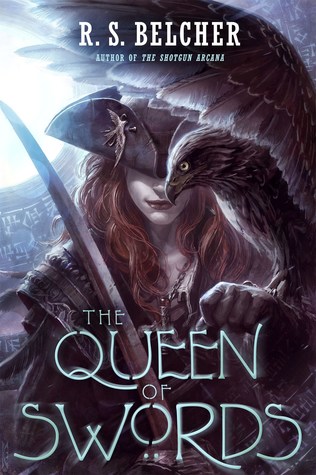 
1870. Maude Stapleton, late of Golgotha, Nevada, is a respectable widow raising a daughter on her own. Few know that Maude belongs to an ancient order of assassins, the Daughters of Lilith, and is as well the great-great-great-great-granddaughter of Anne Bonney, the legendary female pirate.

Leaving Golgotha in search of her daughter Constance, who has been taken from her, Maude travels to Charleston, South Carolina, only to find herself caught in the middle of a secret war between the Daughters of Lilith and their ancestral enemies, the monstrous Sons of Typhon. To save Constance, whose prophetic gifts are sought by both cults, Maude must follow in the footsteps of Anne Bonney as she embarks on a perilous voyage that will ultimately lead her to a lost city of bones in the heart of Africa—and the Father of All Monsters.

I haven't read the first two in the series and judging by the book I thought it was an offshoot series. It is not, but firmly a part of a series. I was not lost as I think Anne Bonney and her descendants take center stage in this one but not center in the other books. I enjoyed it as much as I thought I would but it made me crave more of Anne Bonney's story and I think I'll get some of it when I go back to read the other books in the series. Tor, if you are listening... I'd love to read those other books... *hint* 😉

This story flits back and forth between timelines. The time is stamped on each chapter but even if you didn't pay attention to it, you would not be lost. In this instance Anne's story is more of a supportive role to tell Maude's story but she doesn't take the back seat. In fact, I think she may have stole the show... but it fits her character well.

The weakest parts were with the Sons of Typhon and with Typhon himself. He doesn't quite make my most feared villains but perhaps that is because I haven't read the other stories. He lacked depth but I'm not real sure that bothers me. He was a good backdrop and a reason for the tale we got and I really wanted more of Anne and the sisters of Lilith and that background story.

I give this book 4 stars. While I think you could dive into this one as I did and not be lost, be prepared to want more of Anne's story. I have a feeling you'll be wanting either her own book all to herself or at least the other books in this series. I want both. I recommend it to those that enjoy fantasy and pirates you would sail with around the world.

Email ThisBlogThis!Share to TwitterShare to FacebookShare to Pinterest
Tag! You're it!: demon, fantasy, magic, pirates, retelling