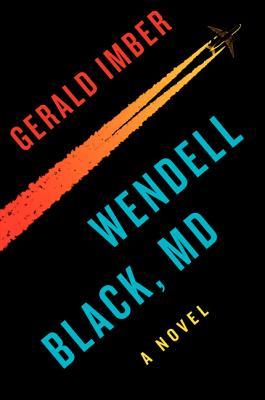 
A New York City police surgeon finds himself in the middle of an international drug-smuggling ring--or is it an even more dangerous conspiracy?

After a heart-thumping drop in altitude on a flight from London to New York, NYPD police surgeon Wendell Black is called on to try to save a woman who has gone into cardiac arrest. He's just carrying out his duty, but his aid places him at the center of an international drug-smuggling investigation.

As Black, and his English girlfriend, Alice--a knockout beauty and a surgeon to boot--digs deeper into the activities of the drug ring, he begins to suspect that a number of British doctors are involved. And when one of Alice's colleagues is brutally murdered and Alice suddenly disappears, the NYPD starts looking to Black for answers. His search peels away rings of conspiracy that expose a shocking threat to the nation.

My thoughts:
This is a spy thriller novel set in contemporary times. It's set around Wendell Black a MD in the NYPD. He isn't thrilled with his life as he knows it, but it is comfortable and he has a beautiful cosmetic surgeon girlfriend. He is on a flight from London when turbulence hits and suddenly there is an on-board emergency. The patient is lost, but even though Wendell is perplexed as to why the healthy, young patient died, he goes on with life. When questions arise after the ME examines the body, one strange coincidence builds upon another and suddenly he finds himself in the middle of a drug ring. Still more questions arise as more odd coincidences transpire. It starts looking less like a drug smuggling problem and more like terrorism. Now will anyone believe him.

I think the twists and turns as well as the way the book slowly builds the suspense and mystery would have made a great book. I enjoyed Wendell's character, but found the secondary characters lacking. I think it made the more suspenseful parts of the book weaker. I really didn't enjoy Alice's character. Someone who is supposed to be a surgeon and a spy should know what she is doing. Should be at least strong in mind. When she plays second fiddle to Wendell who has no prior experience with espionage in terms of skill, I had a problem with it. There were times when she suddenly had to capitulate to Wendell's greater observational skills or deductive reasoning, I rolled my eyes a bit. I needed her to be much stronger and even lead HIM by the hand a bit to make the story plausible. However, I totally admit that this might only bother me and it may not bother others at all.

There were also another great secondary character, Duce, who is his best friend. Again I would have liked him fleshed out more which would have brought more to the story. Also, a bad guy, Rodriguez who is part of the DEA could also have used more flesh. He had more time in the book, but still read a bit more like a one dimensional bad guy. Perhaps if there was more reasoning earlier, more nuance as to why he was a jerk to Wendell, it would have amped up the danger surrounding Rodriguez.

I give this book between 2 1/2 and 3 stars. I split it that way because the book is very readable and I did enjoy the twists to the plot. Despite the flaws and I think men in particular would enjoy it since Wendell is easily identifiable.
Posted by Melissa (Books and Things) at 12:00 AM

Email ThisBlogThis!Share to TwitterShare to FacebookShare to Pinterest
Tag! You're it!: contemporary, spy