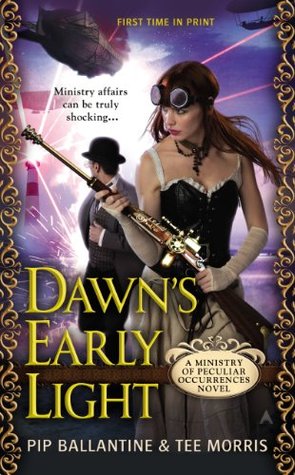 Even with the help of two American agents from the Office of the Supernatural and the Metaphysical, Braun and Books have their work cut out for them as their chief suspect in a rash of nautical and aerial disasters is none other than Thomas Edison. Between the fantastic electric machines of Edison, the eccentricities of MoPO consultant Nikola Tesla, and the mysterious machinations of a new threat known only as the Maestro, they may find themselves in far worse danger than they ever have been in before…

My thoughts:
Another great installment in this series. Only question... will we ever see Welly's face on the cover? I love those teases... :D

In this book our duo is shipped to the Americas finally getting some field work which ends up helping their American counterparts in taking down a notorious evil mastermind... Thomas Edison. Okay, well, he isn't completely evil, it's just good business to destroy any and all competition.

There are also many other elements at play here. There is a side mystery with the Prince, Her Majesty, and the notorious House of Usher (which we have seen in the other episodes/series) and a couple of assassins. The blurb has it right, it is quite convoluted indeed. While all these parts, which could become confusing if it went on for much longer, do come together in the end... there are still loose threads. Including one that will go on in the next chapter for our duo. We know they won't get a moment to just find out what is going on between them relationship wise. Still you know that Eliza will press the issue and Welly will try to dodge it, but we do have some answers regarding their relationship in this book.

I don't want to give away too much, but I was satisfied with the story and I really want the next one in my hot little hands now. I'm curious as to where the last thread leads and what personal developments we will have with Eliza and Welly. I give this book 4 stars and if you are looking for a good series with lots of steampunk gadgets, nods to iconic tv and movies, evil and good historical figures and some great interaction between characters, mystery and thrilling spy work do get this book! In fact this series is great in terms of steampunk and spy work. Get it!

Bloggy Note:
Last day to enter for some great prizes in this series. Go to the post HERE for deets. US/CAN only.
Posted by Melissa (Books and Things) at 12:00 AM

Email ThisBlogThis!Share to TwitterShare to FacebookShare to Pinterest
Tag! You're it!: historical, mystery, spy, Steampunk