The Criminal Investigation Division of the great city of Dorstaad doesn't normally allow just anyone access to their case files, but after several days of aggressive negotiations (bribery may or may not have been involved), a group of curious bloggers, Books and Things included, has been allowed to rummage through some of the more peculiar cases that their top inspectors, Janus Mikani and Celeste Ritsuko, have worked on. While we were there, mostly unsupervised, we poked around more than was strictly permissible and found some of their personal correspondence as well. It goes without saying that neither of them was present at the time. I like my limbs right where they are, thank you very much.

Btw, I'm totally throwing Maja under the bus if the detectives catch on to my involvement. It was her idea. Just a fair warning, Maja... ;)

(click on the pics to make larger if needed) 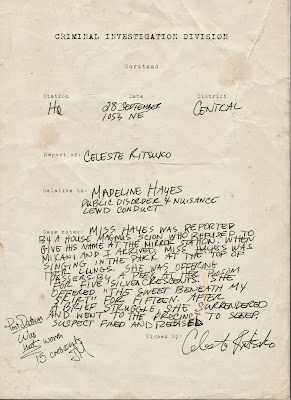 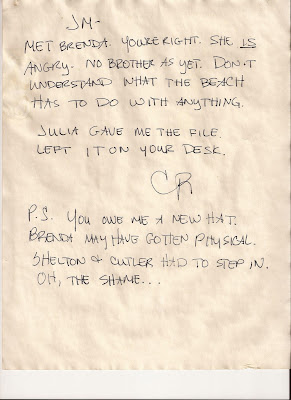 The notes tell a story which starts at the Nocturnal Library, and continues on all the other tour stops, so make sure to check them all out. You can find the links below.
(my review of their case) 
Author bio:
A.A. Aguirre is the pseudonym for Ann & Andres Aguirre, a husband-wife writing team. She specializes in compelling characters; he excels at meticulous worldbuilding. By day, she's a USA Today bestselling novelist, and he is a pharmaceuticals tycoon.

Born in Mexico, Andres spent his early years traveling and getting in trouble everywhere else. Along the way, he got a degree from Pepperdine in economics and international business. Ann was born in the Midwest and has a degree in English Literature from Ball State. She's traveled less than Andres and gotten into less trouble, but scaling Macchu Pichu should count for something, right?

Now settled, if not fully domesticated, Andres lives with his love, Ann, their fantastic kids, one whiny cat, and two wistful dogs.

Curious yet? Mystery getting to you? *evil laugh* Well, you are in luck! Ann has graciously let me give away one signed book and it's INTERNATIONAL! What do you have to do to win? Well, you don't have to get your scoobie on, you just have to fill out the rafflecopter form below. Good luck!
a Rafflecopter giveaway
Posted by Melissa (Books and Things) at 12:00 AM