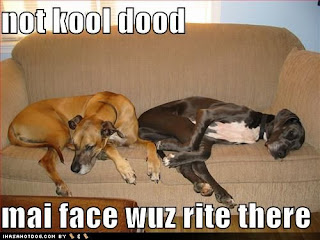 I would like to apologize to any bloggers out there that might have felt a bit neglected by me lately. I've been dealing with a problem with my doberman. He had a couple of bouts with gas (although at the time I didn't know that was all he had).

During the second bout with gas it was Sunday morning (why these things don't happen under normal vet working hours/days I'll never know). He woke me up and couldn't walk. Scared me half to death. Notice that it wasn't pain in any specific place, nor was it unilateral. As I sat in the emergency vet's office explaining what I thought it could be (he was acting normally at that point) I realized my other dog was having some small problems as well. As I kept talking it dawned on me that it must be the food! I had gone through this once before with my dad's dog trying to figure out what was wrong and it was the dog food. Ah HAH! Looked up to see if the food had been sold to another company and found that other people have had the same question. The dog food I had selected was at one time very open about it's sources, but had become very tight lipped. Plus the food had been getting cheaper and cheaper.

Well, as soon as I had stopped the food and put him on a bland diet, my doberman rallied. I have selected a new food and I am now slowly adapting him to it. I'm adapting my other dog to the food and noticed that things I've been questioning (like her weeping eyes and ear infection) have been clearing up. I've also noticed that my doberman's skin quality has improved. I have researched this food and they are clear as to where their sources come from and I have found that they seem to be also concerned about it's quality as well.

I have found that whenever a dog food company sells to another it seems that the quality goes down. I didn't put any brand names down because I don't want to unduly influence people into changing what is working for them at the moment. I will say this... I will not buy from any dog or cat food company who's production company comes from Menu, Mars or Diamond. Diamond is the least of the 3, but they ruined one of my favorite dog foods. Sometimes you have to research a lot to find out who the production company is, but usually if you look around you can find it. Usually someone will post from the Whole Dog Journal as to what company produces what on their private blog. Just a hint. ;)

I also know about home-made raw food diets. They are really good especially when you find recipes that are endorsed by nutritional vets (not all vets have this speciality as an fyi). If you want a list of good books for this, just e-mail me and I'll try my best to get a good list of books for you. Anyway, I have done the raw food diet for my shelties because they both had health problems. They really lived very healthy lives despite their problems. I do attribute it to the diet. I am using a prepared diet now because of the ease. It's easier to have a diet that I can leave with a sitter in case I have to go somewhere in a short notice... like a family emergency. It's also a bit cheaper at the moment to do a prepared meal. However, if it comes down to it, I would do a raw diet again.

I guess I am now down off my soap box. I guess I just wanted to put it out there about how disappointed and upset I've been at these dog food companies. "sigh" Sorry for the long speech. :) Back to your regularly scheduled book reviews. :D 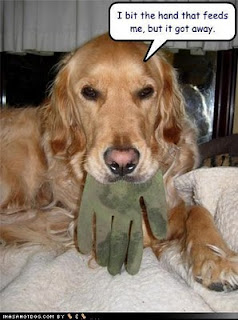 Posted by Melissa (Books and Things) at 2:21 PM

Email ThisBlogThis!Share to TwitterShare to FacebookShare to Pinterest
Tag! You're it!: Apology, dog