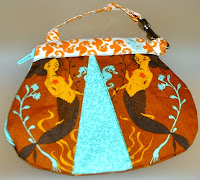 After being a part of the Craftster community, I finally decided to do a swap. I chose the mermaid swap since I've been a fan of mermaids since forever. There are personal reasons, but those could embarrass those that I love... and I chose those times carefully. You know these people know where I live. :)
Anyway, thought I'd share a few of the things I did for the swap. I feel it is safe to do so since the recipient got the package yesterday. 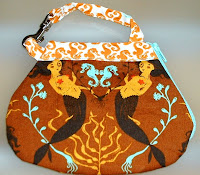 As you can see I did several sewing projects. The purse you see on the side was from a project designed by SewSpoiled on Etsy. It is her small ladybug purse, but I just couldn't resist seeing the tail of the mermaid in the design and found the perfect pattern that would allow me to split it in an eye pleasing way. The other two projects were easy ones for me. The first picture is obviously a head band made with mermaid fabric. The other is an eye pillow. I've made these before, but I decided to add a sleeve. That way the outer shell can be washed since the inner pillow cannot. That way everything is kept quite hygienic. Since the pictures were getting a bit screwy on me and I'm being lazy and not dealing with the html or css, I'll continue this on another blog post. So there will be more to come soon.
If you are considering doing a swap, there is a walkthrough there at the Craftster site. Makes it for newbies like me to have a bit of fun without a lot of the worry. Now I only hope that my partner likes her goodies. To be continued....

Posted by Melissa (Books and Things) at 5:08 PM

Email ThisBlogThis!Share to TwitterShare to FacebookShare to Pinterest
Tag! You're it!: craft, Etsy, Sewing, swap